On Independence Blvd., Work To Begin Soon On 254 Apartments 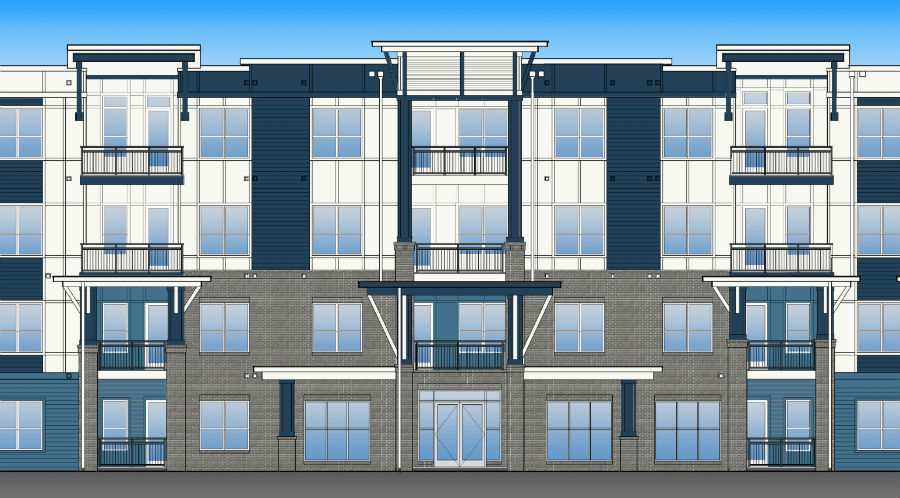 A portion of a rendering of Woodfield Wilmington, a 254-unit apartment community coming to Independence Boulevard. (Courtesy of Watts Leaf Architects of Charlotte)
Construction of an apartment project on Independence Boulevard near Echo Farms is expected to begin soon after the development company worked out a sewer capacity solution for the site.

Woodfield Investments bought the wooded property at 3938 and 3970 Independence Boulevard for nearly $1.7 million from Wilson and Angie Ki, according to a July 13 deed recorded in New Hanover County.

Woodfield Wilmington, announced in November 2016, will include 254 apartments in four buildings on 15 acres. Woodfield Investments is paying to construct a temporary pump station, at an undisclosed cost, because Cape Fear Public Utility Authority's Pump Station No. 36 is in need of an upgrade, said Scott Underwood, a partner in Woodfield Investments.

Once the CFPUA's work is complete, the apartment project will be required to switch from its temporary pump station to using Pump Station No. 36, Underwood said. CFPUA officials said Tuesday that the Pump Station No. 36 work is expected to be complete by the end of the summer/second half of 2020.

Woodfield Wilmington will be the first Port City development for Woodfield, a company that has multi-family projects in the Triangle area and Charlotte, along with Charleston and Greenville, South Carolina, and the Washington D.C. metro area.

Underwood said Woodfield is excited to enter the Wilmington market and will be looking for more opportunities in the area.

"The success of just even the RiverLights district so far to me is a great indicator of this side of town," Underwood said.

In addition to three, three-story buildings and one four-story building, the plans for the Woodfield apartments include a pool, fitness center, yoga room and a sky terrace. Underwood said the exact rental rate has not been set yet, and rates will be refined as the developers get closer to opening the apartment community's doors.

He said he expects clearing and grading of the wooded property to begin soon, with potential completion of Woodfield Wilmington by January 2020. Harold K. Jordan & Co. Inc. is the contractor for the project.

Woodfield Investments is also in the process of working on a cost-sharing agreement with CFPUA to upgrade a water line along Independence Boulevard.