UNCW As A Commercial Activity Driver 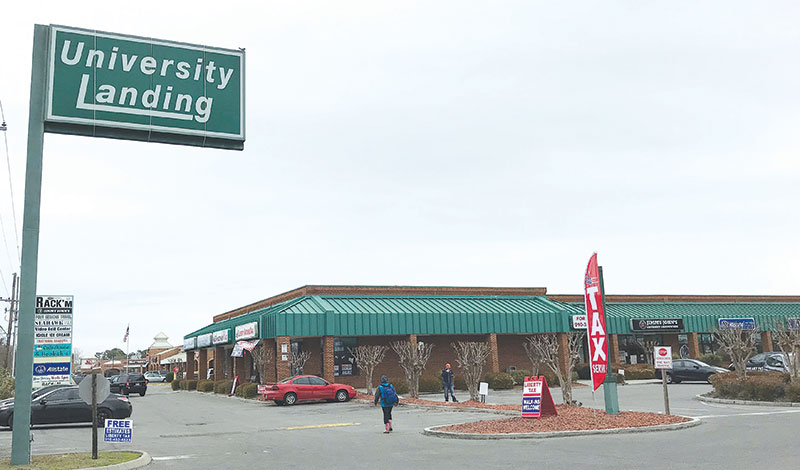 Local brokers recently filled up units at University Landing, a shopping center near UNCW, with tenants and sold them to investors. (photo by Cece Nunn)

A city that contains a major university has an advantage over other communities when it comes to commercial real estate, brokers say.

Wilmington’s largest higher educational institution is the University of North Carolina Wilmington at 601 South College Road, along a heavily developed and traveled corridor.

“UNCW’s population of nearly 17,000 students is a significant economic driver for Wilmington’s retail market as well as other service-related businesses,” said Cody Cress of The Cress Group of Coldwell Banker Commercial SunCoast, a Wilmington- based commercial real estate firm.

The university’s student, faculty and staff population is expected to continue to grow, and residential growth tends to spur commercial activity.

Wilmington Mayor Bill Saffo said no residential subdivisions in the area bring in as many residents as UNCW, that the university is the No. 1 source of residential growth in the community according to his determination.

“We’re talking about 1,000 people a year, humans, that are moving into the community right smack dab in the middle of the city,” Saffo said.

The mayor said that every week, he hears from someone who has moved to Wilmington because their child attended or is attending UNCW.

“From my perspective, the university has brought me a lot of people, a lot of citizens, at least on a temporary basis but more importantly, it also brings me a certain amount of people who move [permanently] into the community,” Saffo said.

In one recent commercial transaction near the university, an investor purchased seven retail condominiums in University Landing Shopping Center for $1.2 million.

In the case of University Landing as part of getting the units ready for a sale, the rents were brought up to market rate and ECCRE broker Julie Stephenson worked to fill them with longer-term tenants, including retailers that cater to the age demographic a university provides.

As the university grows, so too will the number of businesses near the school that are interested in capturing the market students and employees of UNCW comprise.

Some of those businesses, including restaurants and coffee shops, are on campus. Last year, The Hub, the newest dining space at UNCW, opened its doors in August and welcomed MOOYAH Burgers, Fries & Shakes, a fast-casual chain based in Plano, Texas.

Like all restaurants on campus, MOOYAH is open to the public. The Hub also includes a Starbucks and P.O.D. (Provisions on Demand) Market. Other campus restaurants include Subway, Chick-fil-A, Port City Java, Einstein Bros. Bagels, Dunkin Donuts, several delis, a Mexican cantina and a farm-to-table grill.

Elsewhere on campus, a major addition in the works will not only house classes that produce future employees in health professions but will also create jobs for those who work in the development and construction industries.

The Wilmington office of Virginia- based general contractor W.M. Jordan is managing the construction of Veterans Hall, which informally had been known as UNCW’s Allied Health Building until a ground-breaking ceremony in January.

The presence of UNCW and Cape Fear Community College in Wilmington has led to several student housing projects rising in the Wilmington area in recent years.

In one of the latest private projects expected to house students, a developer is planning to break ground in late fall or winter of next year on Kerr Station Lofts, an apartment and townhome development that will replace an old shopping center on South Kerr Avenue. The project also includes 5,000 square feet of retail and office space.

Andrew Weddle of Kerr Station Lofts development firm Weddle Real Estate Investments (WREI) said that while not all of the renters will be UNCW students, the project is designed to appeal to students as they advance in their academic careers or move on to graduate school.

Steve Hall, a partner in Wilmington- based commercial real estate firm Maus, Warwick, Matthews & Co., conducted the property assemblage, which is under contract, for the Kerr Station Lofts site and is the listing agent for the retail and office space.

Hall said the project will “help revitalize” the Kerr Avenue corridor up to Market Street.

“Now you’re going to have 400- plus residents that can walk to the neighboring retail centers,” Hall said. “We will begin here shortly seeking tenants for that 5,000 square feet, probably more geared towards servicing the tenants of the Kerr Station Lofts and other apartments nearby.”

While it’s hard to measure the exact impact UNCW has had on the South College Road corridor recently and in the past, a previous study showed that UNCW and CFCC had created a total of $1.2 billion in regional income for the fiscal year 2012-13. That was according to an analysis by Economic Modeling Specialists International (EMSI).

Assessing each campus’s impact on the regional economy, EMSI analyzed payroll and operations spending, construction spending and the spending of students, visitors, alumni and startup companies.

Another study, which looked at data from the 2011-12 academic year focusing just on UNCW, showed that the university had a more than $1 billion impact on the economy of Southeastern North Carolina. The study was conducted by the Swain Center for Business and Economic Services and focused on UNCW’s economic impact in four major areas: construction and renovation projects, student spending, spending by faculty and staff members and the campus’ day-to-day operations.

“UNCW employs more than 2,000 faculty and staff,” Cress pointed out, “ranked in the top five employers in our area, providing economic stimulus to Wilmington.