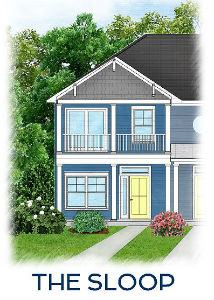 A townhome neighborhood coming to RiverLights in 2018 will expand the variety of home options in the master-planned community on River Road in Wilmington, according to a news release.

RiverLights officials recently announced the addition of Southern Gale Townhomes, developed by Wilmington builder Laurel Homes, to the variety of housing available in the development, with townhome packages starting in the mid-$200,000s, a news release said.

"The addition of Southern Gale Townhomes opens up the RiverLights community to a wide range of buyers, from young professionals and families to retirees," said Jim Henry, vice president of operations of Newland Communities, in the release. "To foster an active lifestyle, these townhomes are located near the heart of our community to provide residents with close proximity to amenities, activities and community events."

Southern Gale Townhomes will range from 1,455 to 1,782 square feet, "specifically designed for the RiverLights coastal lifestyle," the release said.

The release said that to accommodate a wide range of families, there will be three floor-plan options that include two-, three- and four-bedroom layouts: The Sloop, The Schooner and The Clipper.

The Sloop (pictured above) will feature a balcony off the master bedroom, along with a private bathroom for each bedroom. The Schooner’s one-story layout will include a large master suite downstairs in addition to an upstairs loft with two bedrooms. The Clipper, a four-bedroom townhome, will feature dual master bedrooms located upstairs and downstairs, along with two extra bedrooms for separate space. Customizable features and amenities, including a one-car garage, are available for each layout, the release stated.

Upon completion, RiverLights is planned to have 2,290 homes. The community has had 154 home sales to date, RiverLlights officials said this week.

In general, townhomes are always in demand and have been a particularly popular product in the Wilmington area, said Trey Wallace, president of Intracoastal Realty, in an email.

"While they are owned by all kinds demographics, they work particularly well for retirees, single people or small families, and people who want to own a second home in our area. The biggest draw for these groups is the low maintenance living that townhomes provide," Wallace said.

He also said, "There have been many new townhome projects built in our area in the last few years, which has ignited additional interest by consumers and developers. Most of them have been hugely successful and have sold most of their inventory."