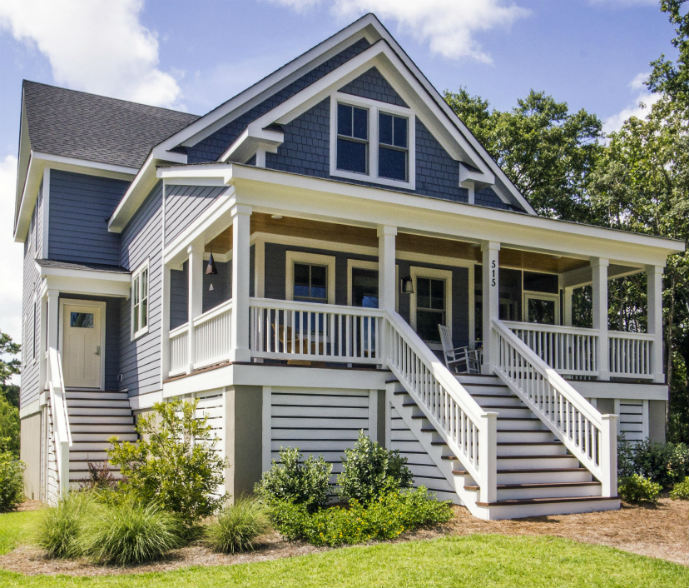 Plantation Building Corp.'s construction of the Bray-Keiffer house (above) in Southport, and the designation of sales and construction manager Jon Henry, marks the firm's re-entry into the Southport area market. (Courtesy of Plantation Building Corp.)
A Wilmington-based custom homebuilder has re-entered the Southport area market in Brunswick County after a nearly seven-year hiatus.

Plantation Building Corp. recently designated a sales and construction manager for homes in and around Southport, St. James and Oak Island and finished a 2,700-square-foot custom home near Southport's historic downtown in the Jonas Creek neighborhood.

In the 1990s, said Plantation Building Corp. President Dave Spetrino, most of the company's customers were in the Southport market.

"That was a great entrée into custom homebuilding and it was a perfect alignment with the retiree client, which was the predominant make-up of our business, and then as we got more and more active and busier with oceanfront communities as well as the work we were doing in downtown Wilmington and the historic district, it just kind of got pushed to the back burner," Spetrino said.

But the company continued to get calls from those interested in custom homes in that portion of the county.

"Southport is a very active and viable market, and the client that is typically attracted to our company, that's an area where they find themselves retiring and building. It was an easy transition for us, but we had to have the right individual," Spetrino said.

The "right individual" he was referring to is Jon Henry, Plantation Building Corp.'s new-home sales and design expert, who is managing the company's re-entry into the market, holding the giant scissors recently during a Southport-Oak Island Chamber of Commerce ribbon-cutting event at the Jonas Creek house.

"There's quite a bit of growth in the south Brunswick area, and we're positioned to be able to help down there," said Henry, who is also building his own home on Oak Island. "We've got a lot of loyal clients in the area who are excited to see us back."

A native of North Carolina, Henry has been with Plantation Building Corp. for more than three years.

The next Southport project for the company is a 3,000-square-foot home in The Landing, expected to be complete by next summer.