On The Search: How Retirement Communities Attract Residents 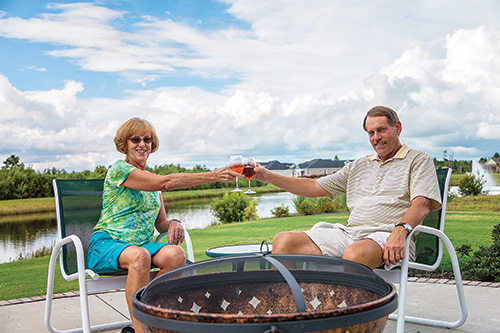 The retired couple, who moved to the Brunswick County development in 2012, point to socializing with other recent newcomers and taking advantage of the development’s amenities like tennis and golf as plus points.

“I tell a lot of my friends still in the work world to enjoy it while you can. When you retire, the world gets very crazy,” Ric Williams joked.

After retirement, the Williamses “were looking as we traveled up and down the East Coast” for the right living option, Ric Williams said.

They considered other places such as Florida but heard good things about the Wilmington area from friends who had visited here.

Then, at a trade show in New Jersey, the first booth the Williamses visited had a Compass Pointe representative.

“We were so excited to find something in line with what we were seeking,” Ric Williams said.

As the housing market rebounds for baby boomers, attracting retirees like the Williamses is at the forefront for a number of area communities. Techniques used during the housing bubble a decade ago, particularly to win over out-of-state owners selling their homes and relocating in the South, are still employed. They range from tailoring website messages to hosting tours of potential new owners to sending reps out to trade shows.

As the baby boomer generation, members of which began turning 65 in 2011, continue to hit retirement age, they make up a sizeable slice of the house-hunting market.

When retirement communities try to reach prospective baby boomer buyers, not only are they promoting features that stand out from other options in the area, but they’re also selling them on the region as well.

They might be competing not just with the other active senior developments that pepper southeastern North Carolina but also with places as large as The Villages that covers three counties in Florida or as far away as Mesa, Arizona, which Forbes included on its list this year of best places to retire.

That might be highlighting cultural offerings or medical facilities, but it could also mean spotlighting Wilmington’s growing craft brewery scene or posting picturesque boat slip photos on Instagram as local retirement communities have done recently on their websites.

They include advertising in national and regional publications.

They also include attending trade shows and hosting private receptions in the Northeast “to generate interest in our area and offering attendees our Coastal Discovery Package, which describes the features and amenities of Brunswick Forest,” Brunswick Forest spokeswoman Brandy Jones said.

The package offers three days and two nights of accommodations for two, on-site or in a nearby hotel, “VIP tour” of Brunswick Forest neighborhoods, a round of golf at Brunswick Forest’s Cape Fear National course and “owner-for-a-day privileges” at its 18,000 square-foot Fitness & Wellness Center.

The weekend visits, which typically come with a fee, are a popular tool, especially to show off newly opened sections of the communities. St. James Plantation, for example, in Southport has a five-day trip and real estate presentation coming up in September, with a focus on Phase II homesites in its newest neighborhood The Grove. Brunswick Forest earlier this month hosted a weekend tour for its new neighborhood Cypress Pointe, with a reception, concert and sightseeing.

Since its inception, about 1,500 families have made Brunswick Forest their home, including about 300 in 2015, Jones said. The development off U.S. 17 encompasses about 4,500 acres.

Compass Pointe officials recently crafted a new master plan for the residential development, which covers more than 2,200 acres – over 800 set aside as conservation areas. Construction started in the development in 2008.

About 400 one-family homes, along with some others designated as “villas,” are complete and occupied. There is no set date for build-out in the development, Adams said.

At any given time, about 50 new homes are under construction in the gated community, he said.
In their hunt for a place to retire, several selling points stuck with Ric and Marci Williams when they came across Compass Pointe.

“We found it attractive as a new place starting up in Wilmington,” Marci Williams said.

Recruiting in the Northeast makes for a diverse population. Many Compass Pointe residents came to the development from New York, New Jersey, Connecticut and Pennsylvania, Ric Williams said.

“It’s where they found success for their sales outreach,” he said.