At CenterPoint, Apartments To Rise First 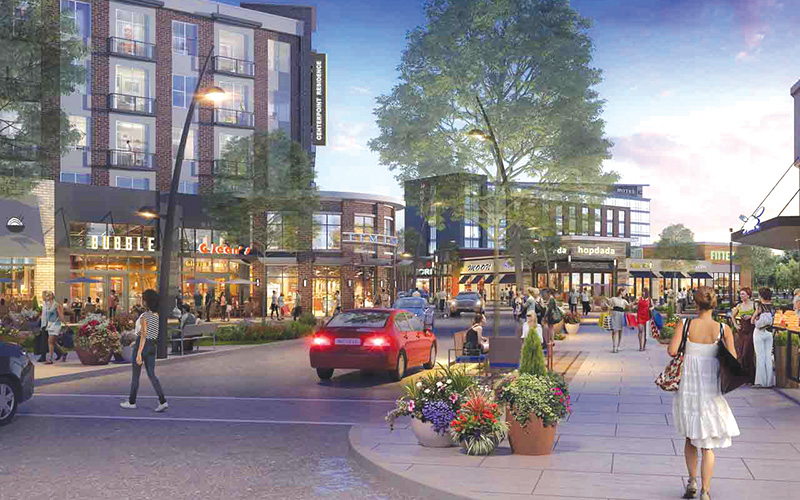 “I think it will be the first quarter of the coming years when we’ll actually break ground and go vertical on the apartments,” said Jason Swain, of Wilmington-based development firm Swain & Associates.

Swain’s firm started working with The Beach Company on the development of CenterPoint about two years ago. The project is expected to include 351 upscale apartments and condos, along with 100,000 square feet of shops and restaurants, office space and a hotel.

The groundbreaking for CenterPoint, which is underway on 23 acres at 1531 and 1541 Eastwood Road, had been anticipated to coincide with the start of the N.C. Department of Transportation’s extension of Drysdale Drive.

Drysdale Drive previously ended across Military Cutoff Road from one of the entrances to the high-end Landfall neighborhood, Landfall Center and the New Hanover County Public Library’s Northeast Branch.

Traffic was a concern for both users of the heavily traveled corridors and the developers.

“We originally promised that we wouldn’t start CenterPoint until the DOT started the road work. That was important to us to live up to that promise,” Swain said. “We just felt like it was important for the road network to be going before we started the development.”

The overall groundbreaking for CenterPoint took place more than two months ago with the clearing of trees.

“The first thing we’re focused on now is getting going on the site work before the winter weather sets in because that’s usually a difficult time to do site work,” Swain said.

Swain & Associates purchased the site of CenterPoint in a $13 million deal in 2019 and previously valued the development at $250 million, although construction and other costs associated with development have risen significantly since the project was first announced in 2017.

Company officials wanted to work with South Carolina-based The Beach Company on the project because of its reputation and similarities between the two firms.

“We’ve always been very impressed with their track record of developing best in class developments across the Southeast,” Swain said in an email in August. “The fact that both of our companies are family development firms means our cultures coincide
well. With The Beach Company’s headquarters in Charleston, there are also many parallels between the communities in which our teams live and work.”

A sampling of The Beach Company’s notable projects, according to its website, include:

KIAWAH ISLAND: From 1988 to 1997, The Beach Company, which was founded in 1945, led the team that bought all of the undeveloped land and resort amenities on 10,000- acre Kiawah Island, “making it the largest real estate transaction in the state’s history. The hotel and resort is now owned and operated by an affiliate of Virginia Investment Trust. The Kiawah Island Club and residential sales were managed and owned by Kiawah Development Partners Inc. until June 2013.”

EDDY ON THE JAMES: Located about three minutes from downtown Richmond, the 1.65-acre community “will consist of 266,854 square feet of Class A apartments with approximately 8,000 square feet of amenity space and 2,603 square feet of ground-floor commercial space. The community’s prime proximity to the James River Park System will offer residents convenient access to Richmond’s network of pedestrian and bike trails and the river’s recreational offerings, including tubing, swimming, canoeing and guided tours.”

MAIN + STONE: A 293-unit mixeduse development in Greenville, South Carolina’s downtown submarket. In addition to apartment homes, this project will add 20,800 square feet of retail and commercial space to create an urban epicenter.

THE VICTORIA: “This high-profile, mixed-use development in the heart of Charleston’s King Street Office and Retail District features 71,000 SF of Class A office and retail space,” The Beach Company’s website states. “The building is occupied by the well-known Nexsen Pruet law firm and the renowned LS3P architecture firm. The first floor is home to national high-end clothing retailer, Brooks Brothers.”

Swain & Associates has been developing residential and commercial projects since 1978, including The Forum shopping center on Military Cutoff Road and thousands of apartments. A recent example is Hawthorne at Smith Creek.

“In 2011, Swain & Associates acquired approximately 125 acres at the intersection of Gordon Road and I-40. After selling 85 acres to New Hanover County for the enlargement of Smith Creek Park, Swain teamed up with Hawthorne Residential Partners and Evolve,” according to the firm’s website.

In the past 44 years, Swain & Associates has developed more than 120 projects in 52 communities for 80 national and regional clients, the company’s website states, and the firm has a portfolio of more than 2.5 million square feet of retail and office space.

The first phase of CenterPoint, which includes the apartments and retail space, is expected to open in mid-2024, Swain said in August. Thomson, Corder & Co. is performing the site work, and McKim & Creed is the engineer.

Of the CenterPoint site, Swain said, “I think in the first quarter of this coming year, people will start to see exciting things happen over there.”