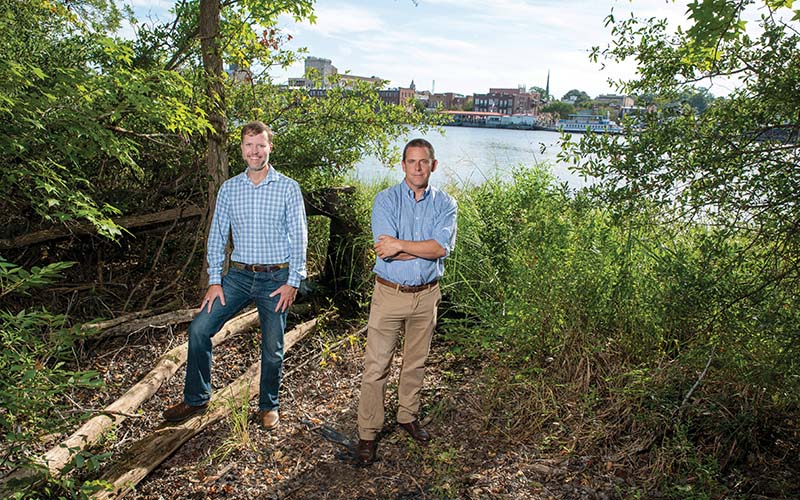 Clark Harris (from left), executive director of Unique Places to Save, and Jeff Fisher, the organization’s board chair, want their organization to buy property across from downtown Wilmington for a park. (File photo)
Officials with an organization that was aiming to raise $16 million to buy more than 80 acres on Eagles Island announced Tuesday that they've terminated their contract to buy the property.

The Chape Hill-based nonprofit Unique Places to Save issued a press release Tuesday afternoon, announcing the decision and explaining that it came after failing to secure a grant from the N.C. Land and Water Fund (NCLWF) to help buy the land.

“In the weeks following the NCLWF Board of Trustees’ disappointing decision, we tried to find a path forward but could not," said Clark Harris, executive director of Unique Places to Save. "While the outcome was not what we had hoped, I am proud of our team's amazing effort to give the community a chance to protect this unique piece of land."

The release said the organization was "counting on the state’s support to create the momentum needed to get private philanthropic donors to the table. Without NCLWF's support and no other viable state or federal grants for land acquisition, the project has gone cold and there appears to be no major donors who are interested in preserving the land and therefore no viable path forward."

Officials said they had hoped to "secure the land," then work with local partners to improve the site for outdoor recreation, education and the conservation of natural resources, according to the release.

Diamondback Development owns the property, where a hotel and spa has been planned by developer Bobby Ginn.

Jay Shott, co-owner of Diamondback Development, said in a previous Greater Wilmington Business Journal story that the $16 million purchase price was far lower than the $25 million the total acreage has appraised for.

“We have all the permits necessary to move forward with the development,” Shott said in July. “If they aren't able to do it, if the community doesn't get behind it, then that lets us know that the community wants to see it developed.”

The proposed purchase price represented the amount Diamondback Development was prepared to seek from Ginn, said Jeff Fisher, chair of Unique Places to Save, in July.

Eagles Island is bordered by the Cape Fear and Brunswick rivers. Harris said his organization's Eagles Island presence will continue with its restoration work on Alligator Creek, which is one of the island's named streams.

"This project is funded by the National Fish and Wildlife Foundation, Damage Assessment Response and Restoration Program under the direction of the Natural Resource Trustee Council," Harris said in the release. "We will also be on the lookout for any future local or regional conservation opportunities. Unique Places to Save believes that conservation has many faces and we are willing to see them all.”

The developers planning a mixed-use project, with apartments, condos a hotel and more, on Point Peter – another west bank site across from downtown Wilmington – have withdrawn their development applications from consideration from New Hanover County. County officials have been in discussions about what they think would make sense to strive for on property across the river that's within the county's jurisdiction.

"In light of the County's continued work toward a unified vision for the West Bank, KFJ would like to officially withdraw its text amendment and rezoning request pending completion of the County's work," wrote Kirk Pugh, one of the would-be developers of the Point Peter site, to county officials in September. "It is our continued hope that we will find common ground at some point in the near future that will allow both KFJ and the County to achieve a mutual goal."