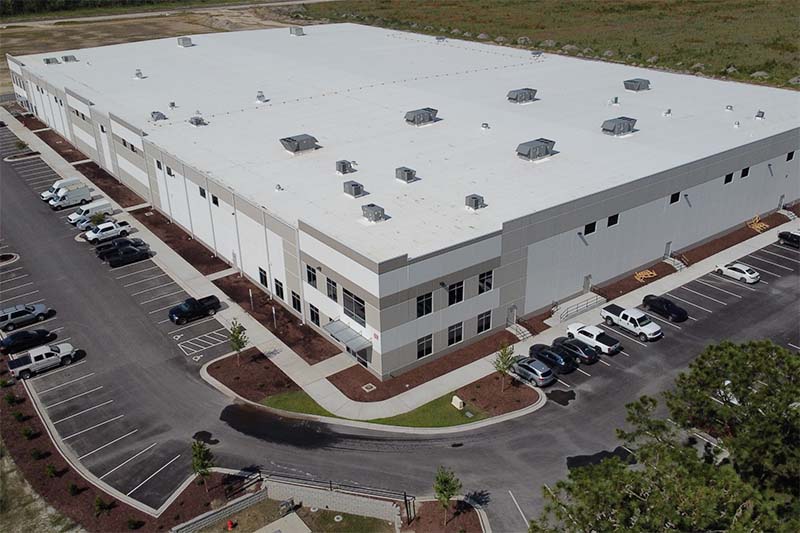 The 150,000-square-foot building was developed speculatively by Cameron Management, Jeff Earp and Windsor Commercial. As an $8.5 million investment in 2021, the speculative development was a risk that appears to have paid off (the taxable value of the property now, including machinery and equipment, is $9.25 million, according to a recent county agreement).

“We wanted to get it leased up within a year of being finished, so we exceeded that goal by having it leased up before we were finished,” Rogers said. “We thought the demand was there.”

Brunswick Business & Industry Development executive director Bill Early has long advocated for speculative industrial development, as the county has historically lacked the kinds of buildings many companies are looking for when aiming to move within a short time frame.

Early told Brunswick County commissioners at their Sept. 19 meeting that this project has jump-started development in the park, which straddles the Brunswick and Columbus County line. “I'm very happy that after many years of development, one of our megasites actually has development on it,” he said. “What was so wonderful about this was the owner was willing to subdivide the property.”

Precision Swiss, a specialty component manufacturer that services the aerospace, medical device and semiconductor industries, is operating in about 60,000 square feet of the building, Early previously told the Greater Wilmington Business Journal.

Investing in a second facility in Brunswick County is part of a company expansion, Dillon said. “We’re well on our way to expanding our business here very quickly,” he said.

As the business settles into its new footprint, the California facility will transition into a prototyping operation where it will test and craft new components for its clients, and the Brunswick County establishment will produce those parts.

Through a state incentive deal announced last year, Precision Swiss is eligible for up to $1.79 million if it generates 125 new jobs. The average salary of the new positions is $54,025, according to details of the incentive deal.

On Monday, Brunswick County commissioners committed to granting the company $270,000 if it creates 125 jobs within three years and invests $8.43 million in machinery and equipment.

Dillon said he anticipates beating the hiring goal within five years. “I think with our growth, we’ll exceed that target,” he said.

Tri-Tech Forensics, the second tenant announced at the facility, has more than 100 employees working at its new location, according to CEO Jim Seidel. So far, Seidel said the new space is a good fit for the company. “Love it,” he said.

The forensic and emergency kit assembly firm relocated its headquarters out of the Leland Industrial Park eight miles down Highway 74 to the new facility. Seidel said he could still use about five or 10 new direct labor assemblers at the new facility and will still maintain a presence five miles from the new headquarters, at 2975 Andrew Jackson Highway, where about 10 staff members are stationed.

Seidel said with the move, “Nothing has changed operationally, but we will have a cleanroom installed soon at the new building and are looking at other capital investments to expand our capabilities.”

Early told commissioners last week he was happy to see the county retain Tri-Tech, as the firm was considering a relocation to Pender County.

The most recently confirmed tenant, Lowe’s, has established a distribution warehouse center in about 67,000 square feet of the new facility. The home improvement company announced it would hire 50 employees to support the “cross-dock delivery terminal for last-mile delivery of bulky items like appliances, riding mowers, grills and patio furniture.”

A Lowe’s spokesperson said Monday the company has already begun operations and is fully staffed.

Construction on a second phase of the International Commerce Center could begin in the first quarter of 2023, Rogers said. The firm is considering switching from precast concrete to tilt-up concrete “because of the price environment,” he said, and is still in the design phase. Rogers said the second phase will be slightly smaller than the first, at roughly 135,000 square feet.