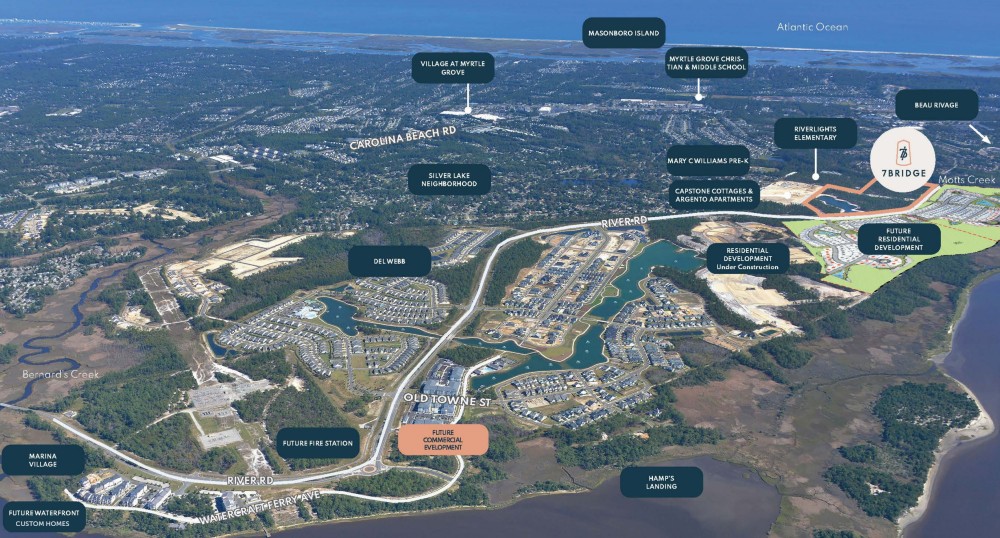 In an aerial of Riverlights, the site for commercial hub 7Bridge can be seen in the right-hand corner. (Illustration courtesy of Riverlights)
Developers unveiled additional plans Friday for 7Bridge, a 37-acre commercial village at the Riverlights master-planned community on River Road in Wilmington.

"With parcels for retail, entertainment, service commercial and offices, 7Bridge is part of a larger 120-acre mixed-use village that will anchor the southern entrance to Riverlights with a variety of residential projects, including Argento, a new multi-family luxury apartment community, and The Cottages, Wilmington’s first single-family-for-rent neighborhood," according to a news release.

Argento at Riverlights, on River Road and Quigley Boulevard, is expected to bring 286 luxury apartments to the mixed-use village by 2024. Riverlights is already home to about 2,000 residents, not including those who reside at existing apartments in the community, officials said Friday.

Adding to the commercial portion of the 1,400-acre mixed-use development, 7Bridge was named for the seven lighthouses that guided ships to port during wartime, according to the release.

“We are developing this as a pedestrian-friendly lifestyle and convenient commercial center that elevates the everyday for our Riverlights community and the surrounding area,” said Nick Cassala, vice president of operations for Riverlights, in the release. "This is the only site zoned for mixed-use development along River Road. The businesses that locate here will conceivably be serving up to 14,000 existing residences within a 3-miles radius."


A variety of commercial options

The initial businesses in 7Bridge could be open by late 2023 to mid-2024, the release stated.

The retail space at the first commercial hub at Riverlights, Marina Village, is 100% occupied by restaurants, a woman’s boutique, a wine and bottle shop, financial services, a bike shop, virtual golf and bar and an art gallery.

Adjacent to 7Bridge is the site for a New Hanover County elementary school, expected to open for the 2025-26 academic year, according to the release, and The Cottages, scheduled for completion in 2023.

“We are delighted to represent such an outstanding project that is essentially one of the last remaining large commercial development sites available in the Wilmington area,” said Dan Pellegrino, senior vice president of Bridge Commercial, in the release.

More residential news is in store for Riverlights. Phases 5 and 6 of the community are set to be released this year, officials said, and they represent the first significant property release for Riverlights since 2019. The phases include 360 new homesites.

Nearly 800 homes have sold in Riverlights, which is owned by owned by a subsidiary of North America Sekisui House LLC (NASH) and managed by Brookfield Properties. The Del Webb 55-and-up neighborhood within the community is expected to be sold out by the end of this year.