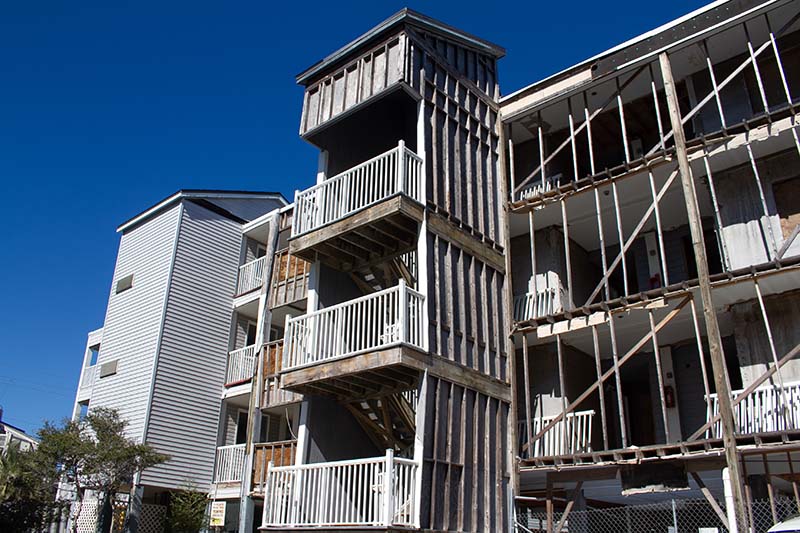 The 42-unit North Pier Ocean Villas, a two-building timeshare condominium in Carolina Beach, has tenatively sold for $8.3 million in an auction as part of the HOA’s Chapter 11 bankruptcy proceedings. (Photo by Johanna F. Still)

The North Pier Ocean Villas timeshare condominium in Carolina Beach is under a nearly ironclad contract to be sold for $8.3 million as part of a bankruptcy proceeding, pending final court approval.

Eight pre-qualified bidders arrived at the U.S. Bankruptcy Court in Raleigh Thursday morning and engaged in a lively contest.

“It's crazy how you put weeks and weeks into this … then everything culminates in an auction that takes 15 minutes,” said Rob Tramantano of Chapel Hill-based Great Neck Realty Co., who specializes in bankruptcy sales. In all, Tramantano courted 100 prospective buyers leading up to Thursday.

Cekra Inc., a Wilmington-based industrial contractor, was the highest bidder, offering to purchase the distressed property for $8.3 million, according to Haidt. A backup bidder, Robert Buchanan, is next in line with an $8.25 million offer. Cekra representatives did not immediately respond to a request to comment. The company has expertise in "uniquely challenging projects," according to its website, and has performed work on bridges across the country.

The 42-unit North Pier Ocean Villas property wound up on the auction floor after its HOA filed for Chapter 11 bankruptcy in August 2021. Representing owners who shared the units among 2,184 weekly timeshares, the HOA lacked the cash necessary to bring one of the property’s two buildings up to code. The building with frontage on Canal Drive is occupied and in much better shape than the one fronting Salt Marsh Lane, which may be considered a tear-down depending on the rehabilitation costs, given local code requirements.

This structurally damaged and unoccupied building would otherwise qualify for condemnation, but the town’s building inspector put the proceedings on pause in order for the HOA to work its financial affairs out through bankruptcy. With damage accelerated by Hurricane Dorian in 2019, the HOA was already in a financially murky position, after decades of timeshare owners handing their deeds back to the HOA to stop paying annual dues, condo officials previously told the court.

Developed in the ‘80s, the property has oceanfront views on Carolina Beach’s north end, just before the Freeman Park entrance.

Representing the HOA, Tramantano said the auction price exceeded everyone’s expectations. In February, he guessed the property could sell for as much as $7 million.

“I think it's it's a function of the market,” Tramantano said. “There's limited opportunities out there and obviously these bidders saw great opportunity in this property. So it couldn't work better from our perspective.”

At the minimum bid price of $3.95 million, each of the condo’s 2,184 timeshares stood to gain a roughly $1,800 payout. Should the high bid stick, they could each receive roughly $3,800 checks. The HOA owns roughly half of all of the shares, due to the deed-backs, and will pay off its debts using those proceeds, per the court-approved sale proceedings.

“We have a very firm contract with absolutely no outs, or no conditions by which the buyer can terminate the contract,” Tramantano said.

Closing will occur within 10 days of the court approving the final sale order, which has yet to be turned over to the judge. Tramantano expects to close during the first week of May.