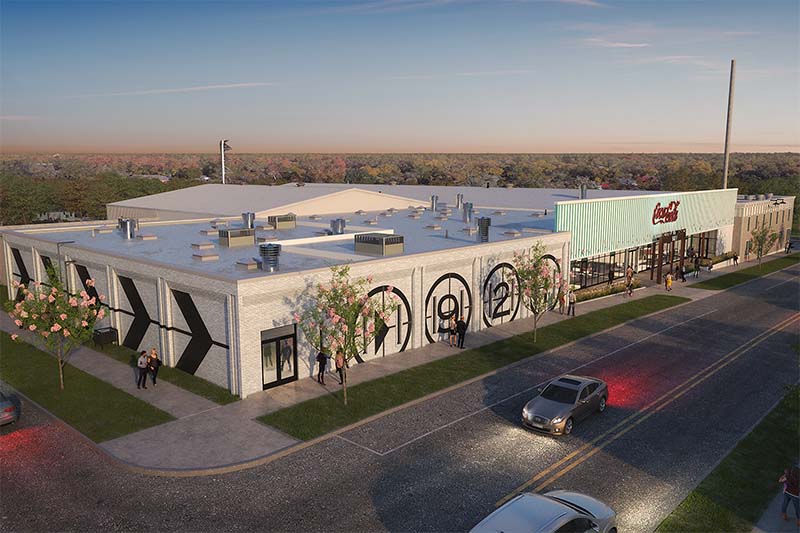 A multi-block and multi-phase redevelopment process of the former Coca-Cola bottling plant in downtown Wilmington will begin construction in March. (Image courtesy of WDI and Parastream Development)

Plans for the redevelopment of the old Coca-Cola plant in Wilmington’s Soda Pop District are moving forward. Parastream Development on Monday released renderings for “The Bottle Works Building” project, an urban-flex warehouse.

Construction in the first portion of the two-phase adaptive reuse project is planned for March, expected to wrap up by the summer. It includes 74,000 square feet of leasable areas that span from 400 to 12,000 square feet.

Meant for warehouse use, light manufacturing, assembly, distribution, office, retail and storefront opportunities, the flex space has a range of options for tenants.

The first phase will involve enhancing the old soda plant building at 921 Princess St. Parastream Development plans to invest about $2 million in this process, according to a Wilmington Downtown Inc. press release. The company purchased the property, which is located on a 1.5-acre block, for $8 million in a deal that included multiple properties totaling 7 acres in October.

Bowman Murray Hemingway Architects and Monteith Construction Co. are collaborating on the project, designed to “activate the building and make it interactive for its tenants and consumers,” Sandy Thorpe of Parastream Development said in the release.

“The Bottle Works Building is a unique product coming to Wilmington offering well-designed urban flex space for makers who need a central presence downtown and could get lost in an industrial park setting,” Thorpe said. “We are proud to bring this product to the Soda Pop District as another contribution that will add to this growing neighborhood with more announcements to come soon in retail and hospitality.”

Bruce Bowman, principal of the architectural firm, said in the release the new mercantile storefront along Princess and 10th streets will reactivate the neighboring streets. Plans also include repainting the structure with film-inspired graphics, which borders Cucalorus’ Jengo’s Playhouse.

“This is part of a new chapter of the emerging Soda Pop District that will compliment Hi-Wire Brewing and other recent adaptive reuse projects in this area,” Bowman said in the release. “Many of these projects result from the city’s new UMX Zoning District that also helped foster redevelopment in other previously underutilized areas such as the South Front District.”

A 13,000-square-foot second phase involves the uncovering of a 1920s Bottling Works Building, currently sheathed behind metal panels on the corner of 10th and Princess streets. This phase will maintain the building’s current storage capabilities, introduce subdivided spaces and potentially accommodate shared co-working and studio space.

Representatives of the CRESS Group at Coldwell Banker Commercial Sun Coast Partners, Tyler Pegg, Will Daube and Cody Cress, are the leasing agents for the property.

The redevelopment will create opportunities for manufacturing jobs, WDI’s president Holly Childs said in the release. “This entire district will benefit from today’s investment in The Bottle Works Building as a catalyst for future development of neighborhood retail, restaurants, hospitality and housing.”