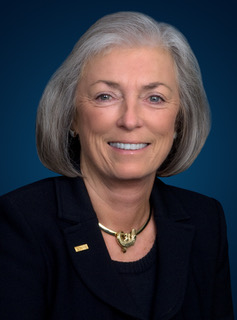 Jacqueline B. Amato
The group behind plans for a mixed-use project on the western bank of the Cape Fear River has a new partner after the resignation of one of its founding members, Frank Pasquale.

KFJ Development Group announced Tuesday that it has entered into a partnership with Jacqueline B. Amato, retired chairman and CEO of TowneBank Mortgage. KFJ envisions condos, apartments, a hotel and commercial space on 8 acres at a fork of the Northeast Cape Fear and Cape Fear rivers, a plan that has met with some opposition from local officials and nonprofit groups.

The New Hanover County Board of Commissioners in January tabled a rezoning needed for the proposed development, which is called Battleship Point, to allow for more discussion on the type of development officials want to see on the western riverfront.

The county's planning staff is preparing for a work session, expected to be held in the next month or two, between the staff and commissioners that would focus in general on the western bank of the Cape Fear and Northeast Cape Fear Rivers across from downtown Wilmington, said Rebekah Roth, planning and land use director.

"From staff’s understanding, the goal of this work session is to determine direction and next steps for staff to pursue in clarifying desired future land uses in this area, which may include additional studies or workshops," Roth wrote in an email to commissioners in January.

Local experts in environmental regulations and other land use considerations are expected to attend the work session to answer questions commissioners might have.

Meanwhile, KFJ is continuing to work on the Battleship Point plan. The addition of Amato adds development industry expertise, according to a KFJ news release.

“Jacqueline’s extensive experience with corporate strategy and project management will be a huge asset to KFJ and the community as we undertake the Battleship Point development,” said Kirk Pugh, KFJ director of marketing and real estate development, in the release. “We are excited to welcome Jacqueline to KFJ, and we wish Frank well in his future endeavors.”

"Amato has more than 30 years of experience running a successful mortgage company," the release stated.

Pasquale is resigning as technical director to focus on other business ventures and family matters, the release stated.

Of the addition of Amato, Pasquale said Tuesday, "I think it's a great thing."

Asked why he left the group, he said, "It's just not going where I thought it would," referring to the Battleship Point project.

As reported in the Greater Wilmington Business Journal last year, Pasquale's development experience is unclear and he couldn't provide an address for a 44-story building he claimed to have developed about 18 years ago on 49th Street in Manhattan.

Currently, the other partner in KFJ in addition to Pugh and Amato is Wilmington attorney Jim Lea III of Lea/Schultz Law.