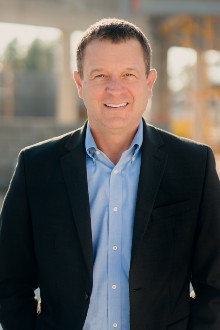 Bryan Thomas
Monteith Construction Corp. appointed its president, Bryan Thomas, to the role of CEO, according to an announcement Thursday.

“Monteith Construction has seen exponential growth over the past 24 years, and Bryan—who started his career as an assistant superintendent with Monteith a year after our company was founded—has been at the helm of that growth,” John Monteith said in the release. “His shift to CEO reflects a natural progression of the company, laying the framework of a sustainable growth model in decades to come.”

Thomas had served as president of the commercial general contractor, which is headquartered in Wilmington, since 2019. As CEO, he leads the company’s long-term strategic planning, in
addition to overseeing high-level operations, according to the release.

“Our team shares in a forward-thinking mindset and it’s been the guiding force of success over the years,” Thomas said in the release. “It’s driven our expansion into new markets, our investment in virtual design and construction technologies, and it continues to push everyone to think of better ways to serve our partners and projects. We’re a company of innovators and we will continue to think big.”

Founded in 1998,  Monteith Construction builds across the Carolinas and into Virginia with offices in Raleigh and Myrtle Beach and Charleston in South Carolina, in addition to the Wilmington headquarters.

The company’s project portfolio runs the gamut of industries and asset classes—from higher education and healthcare to office and mixed-use, the release stated.

“Some of our biggest successes as a company have come over the past couple years despite market volatility that’s been a challenge for the construction industry at large,” Thomas said in the release. “Attracting top-tier talent, launching Monteith SPOTLIGHT—a small projects division focused on quick turnaround and turnkey solutions—and expanding in some of the fastest-growing markets are all indicators we’re on an upward trajectory.

"Now, we’re looking forward to and ready for the opportunities 2022 will bring.”

Firm to convert offices to warehouse space after $6M purchase