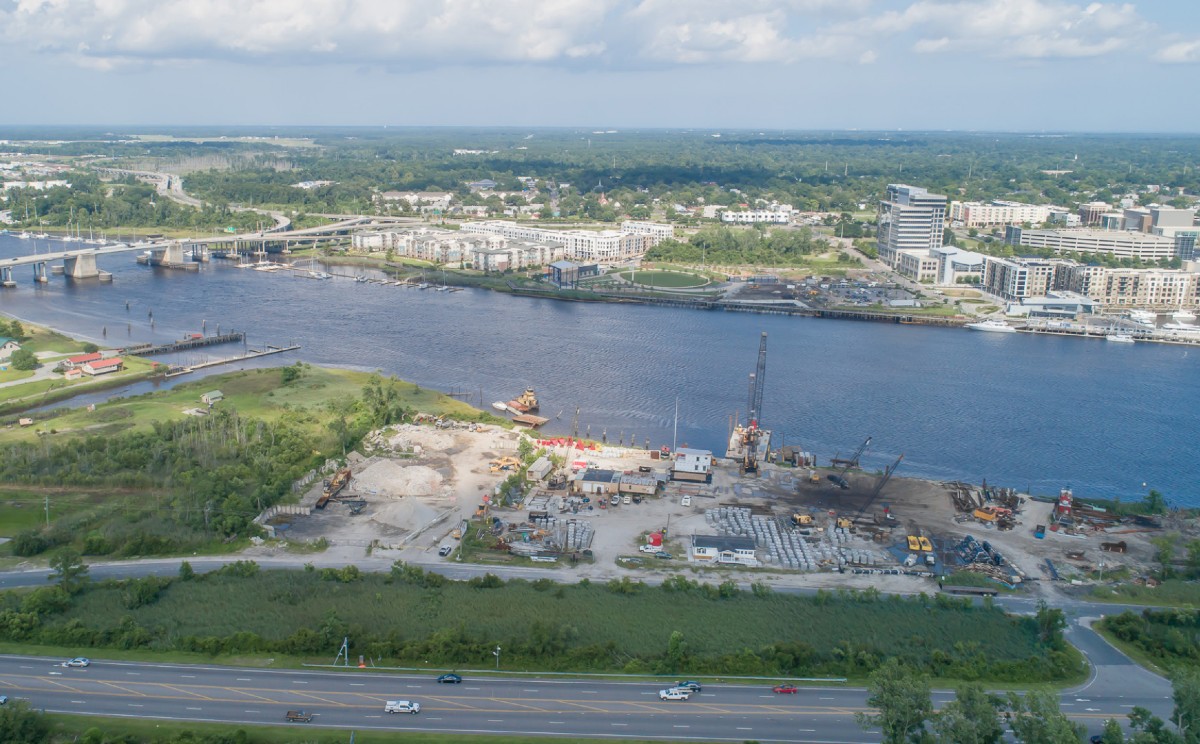 Atlantic Coast Industrial, at 1480 Point Harbor Road, is expected to relocate to another riverfront property on the west bank and U.S. 421 North. (Photo courtesy of Intracoastal Realty Corp.)
David L. Brinkley started Atlantic Coast Industrial about 22 years ago, and since then, the marine construction business has grown, becoming in recent years the prime contractor for major Battleship North Carolina overhaul projects.

In December, a limited liability company managed by Brinkley (no relation to the famous newscaster) bought the 37 acres at 2400 U.S. 421 North in a $2 million transaction, according to property tax records. The seller of the unused land was Colorado-based Agrium US Inc.

Brinkley said Wednesday he plans to move his company, possibly this year, from 1480 Point Harbor Road to the U.S. 421 property, part of which sits along the west bank of the Northeast Cape Fear River, north of downtown.

He will use 8 acres for a laydown area and construction yard, more than doubling his company’s space.

“I’m outgrowing my current yard that I’m on right now,” Brinkley said. “We’re steadily growing and we've been that way for five to six years. There’s a lot of potential out there, but the workforce is kind of slim right now,” particularly in the realm of heavy construction jobs.

He said remaining portions of the newly purchased land will be used for something else eventually, possibly an industrial park.

Previously home to a fertilizer plant, the property is a former EPA Superfund Site that has been cleaned up and released for certain uses that include Brinkley’s intentions.

In the meantime, Brinkley has listed Atlantic Coast Industrial’s current location for sale with a price tag of $6.75 million for the 3.34 acres, according to property marketing materials by the listing agent, Harry Knight of Wilmington-based Intracoastal Realty Corp.

“It’s directly across from PPD and the new Riverfront Park,” Brinkley said. “I have the best view of anybody around.”

Knight's listing also includes 2.67 acres at 1495 Point Harbor Road, which has a separate owner, with an asking price of $5.35 million.

Asked about recent plans that call for tall buildings on the west bank of the river, Brinkley said, “I would love to see a development on this side that has a riverwalk, shopping, food, residential, mixed-use but not overwhelming to downtown or the battleship or taking away from any of the skyline.”

The current Atlantic Coast Industrial location is only about a quarter mile from the Battleship North Carolina. The company completed the battleship’s hull repair project in 2021 and will start this year on updating the vessel's upper masts.

“Top sections of the mast will be removed for land-based repairs and then replaced. Scaffolding also will be added so repairs can be done to parts that remain on the ship,” said Stacie Hidek, spokeswoman for the battleship in an email.

She said the repairs are supported by a grant awarded through a Congressional Emergency Supplemental Historic Preservation Fund appropriated to the National Park Service.

The work is expected to be finished during the first half of 2022.

Hidek said the historic landmark is scheduled to remain open to visitors during the mast repairs and a flooding mitigation project, but access to some areas of the ship might be closed at times to ensure safety.

In addition to its work on the battleship through the N.C. Department of Natural and Cultural Resources, Atlantic Coast Industrial also does work for marine chemical terminals and the city of Wilmington. The firm is in the midst of a project to stabilize the shoreline at another area historic site, Brunswick Town.

Firm to convert offices to warehouse space after $6M purchase