Partners In Riverfront Development Plan Hope For Another Chance At Zoning 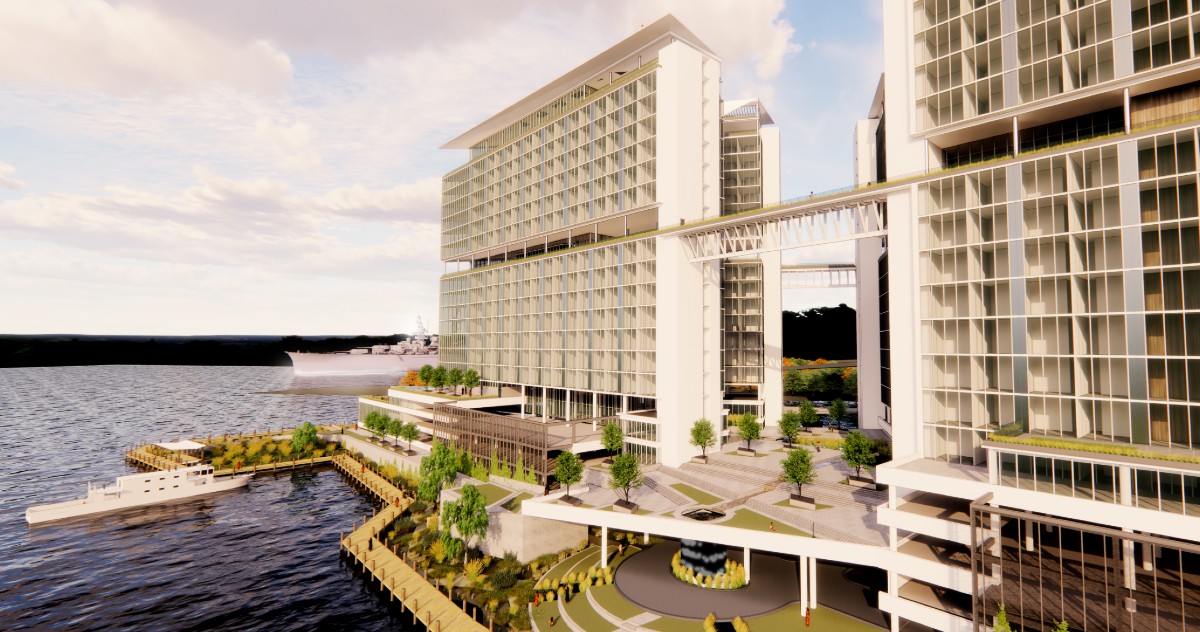 The proposed Battleship Point on land across the river from downtown Wilmington could include condos, apartments and a hotel. (File rendering)
The group that wants to create a $500 million, mixed-use project on the riverfront across from downtown Wilmington hopes to have better luck with the New Hanover County Board of Commissioners after the county's planning panel voted down a related measure Thursday night.

The New Hanover County Planning Board recommended denial of a proposed district, Riverfront Urban Mixed-Use Zoning (RUMXZ), that would fit a proposal called Battleship Point on the west bank of the Cape Fear River.

The proposal has called for about 540 condos, 330 apartments, nearly 200,000 square feet of commercial space and a 76,000-square-foot luxury hotel. It also also called for buildings up to 240 feet, or potentially 24 stories.

"The outcome was disappointing but not entirely unexpected,” said Kirk Pugh, a Wilmington Realtor and one of the partners in the proposal, on Friday. “I think the next step for us is to evaluate the text amendment and to move forward with the county commissioners and see where that goes. We believe in the project; we believe in the benefit that it will provide the county.”

Pugh also said, "We’re evaluating all of our options and we hope to move forward as expeditiously as possible."

The partners are expected to close on their purchase of the Battleship Point site, 8 acres on an arrow point of land bordered by the Cape Fear and Northeast Cape Fear rivers, in December, Pugh has said.

Some professionals in the real estate and development industry are skeptical that such a project is feasible.

The county’s planning staff recommended approval of the new zoning, but members of the planning board on Thursday had concerns about the height in the proposed district, as well as the impact on the environment and flooding.

“I offered the applicant two opportunities Thursday night to continue the item, work with the groups expressing concerns and staff, and see if they could come back to us with a more low-impact, environmentally friendly, less dense project that would be beneficial to all involved. Unfortunately, they chose not to do that and instead asked for what we call ‘an up or down vote’ – which is their right,” said Donna Girardot, vice chair of the planning board, in an email. “The applicant then asked to continue Item #2, which was the proposed rezoning of the project itself [to the new district]."

According to agenda documents describing the RUMXZ, the proposal includes “a district size requirement between 5 and 10 acres; allows for a maximum by-right height of 240 feet; and accommodates a maximum density of 100 units per acre, when vertically integrated as part of a mixed-use building. Aside from dimensional standards, the district prescribes architectural and design elements, and promotes multi-modal transportation options.”

If built, the Battleship Point project would contain the tallest buildings in the region, ahead of PPD's 193-foot-tall downtown Wilmington headquarters