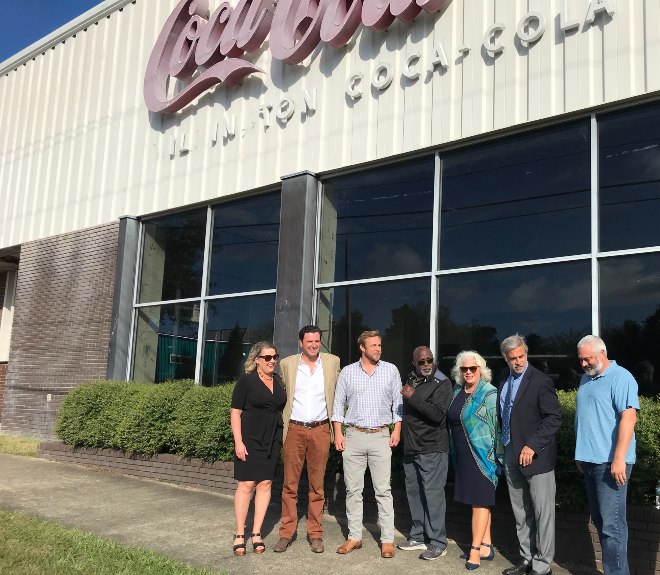 Andy Hewitt and Sandy Thorpe of Parastream Development, which bought the former bottling facility and other buildings and property in the vicinity for $8 million, said they plan to add manufacturing, retail and residential space to the Soda Pop District. The seller was Osprey Lands LLC and the sale closed Friday.

At an event hosted by Wilmington Downtown Inc. on Tuesday morning, Thorpe said Parastream hopes to see the start of construction soon on renovating the former Coca-Cola building at 921 Princess St.

The facility will be turned into urban flex space that includes commercial uses such as storefronts along Princess Street, Thorpe said.

At the end of 2015, Coca-Cola Bottling Co. Consolidated sold its property, including 921 Princess St. and other parcels on 5.5 acres, for $1.5 million to Osprey Lands LLC. A representative of the buyers at the time, Jim McFarland, said his company had plans to turn its property into a retail center with the possibility of a grocery store and restaurants.

While all of those Soda Pop District plans did not come to fruition, the Parastream partners in 2019 bought 1020 Princess St. and developed the space for a Hi-Wire Brewing taproom.

The partners “started looking at investing in downtown Wilmington a few years ago, but kept coming back to this area – its proximity to downtown, its proximity to schools and neighborhoods, its proximity to the hospital,” Hewitt said Tuesday. “There was what we saw as a lot of opportunity. We have historic buildings with a lot of character that were either vacant or underutilized. And that kind of spurred our first investment on Princess Street. We felt very fortunate to land Hi-wire Brewing as a tenant.”

The next steps in the area’s transformation are expected to come in two phases, he said.

Craftspace, a Wilmington company that converts shipping containers into usable residential and commercial space, has leased space in the former Coca-Cola facility warehouse, with plans to expand to 14,000 square feet there in the future, said Bryan Kristof, CEO of Craftspace.

Seven acres in downtown Wilmington is a rare purchase, Wilmington Mayor Bill Saffo said Tuesday, and the city has had its eye on the potential revitalization of the district for a while.

“To be able now to transform this particular area into something that is going to be very beneficial and very beautiful to this community is something that we've been talking about for this area for quite some time,” Saffo said.

He added, “Our new Land Development Code that we just passed a couple of weeks ago I think will tie in perfectly with what we're trying to do here, which is a lot of mixed-use, mixed-income type of uses in this community.”