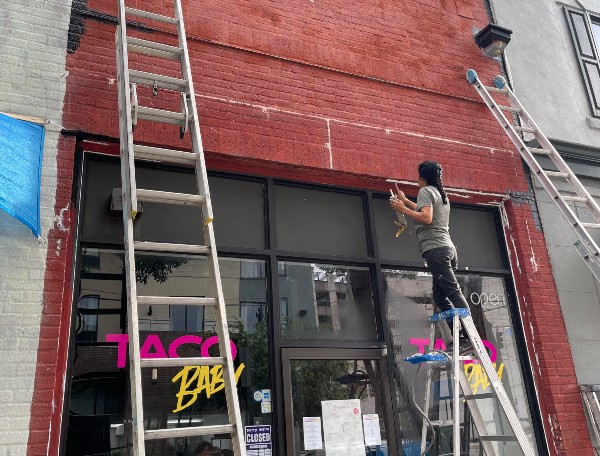 The structure at 6 Market St., which Efird bought in May, needs some work.

“We’ve got five windows in the front of this building, and the top three windows on the second floor are totally rotted out and painted shut as well as the two windows on either side of the front door,” said Efird, who is managing director of SVN | Efird Commercial Real Estate.

A $2,500 facade grant from Wilmington Downtown Inc. will help him accomplish that.

“It's going to improve the look of our building, which improves the look of this end of Market Street,” Efird said. “It’s going to help us a lot with that first impression.”

WDI’s Facade Improvement Grant (FIG) Program was allocated $15,000 this fiscal year through the Municipal Services District (MSD) to distribute to local businesses within the MSD for storefront improvements, according to a WDI news release.

The program started in 2017, and recipients in previous years have included Hell’s Kitchen and Floriana Wilmington.

“The program was underutilized in 2020 due to the COVID-19 pandemic, as many area businesses concentrated on surviving rather than making capital improvements,” the release stated. “The recent grant approvals show this program is taking off again, and downtown businesses are now in a position to make necessary investments in their properties.”

According to the release, members of WDI’s Grants Committee unanimously approved the five proposals received this month. The proposals were then reviewed by the WDI Executive Committee and approved for funding.

“Our committee was impressed by the number of applications that came in for this round of funding. All were solid projects and proposals. This recent round of grant approvals demonstrates the effectiveness of the FIG Program to help downtown businesses and property owners make needed repairs and upgrades to their storefronts, while also working to beautify the overall look and feel of downtown Wilmington,” said Holly Childs, WDI’s president and CEO.

A total of $12,500 in FIG funds has been allocated to businesses this fiscal year, the release stated. WDI officials want to disperse all of the grant funding this year, with just one $2,500 grant remaining.

The other businesses that received grants are:
According to the release, FIG Program criteria include: