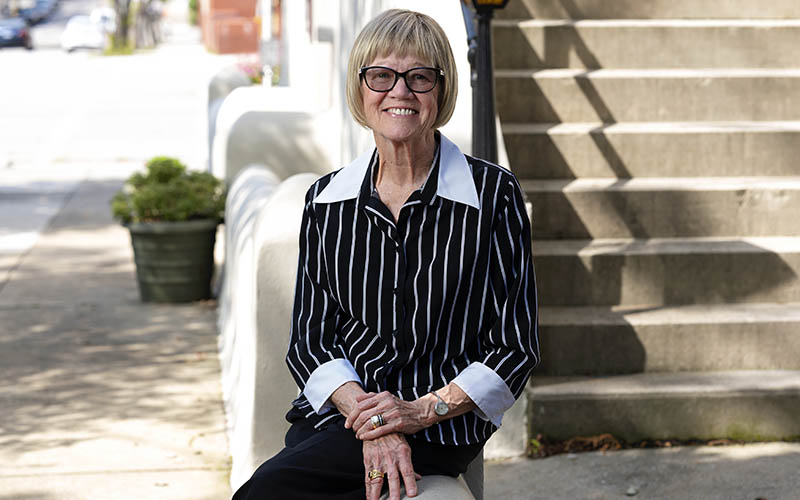 Beth Pancoe, president of SDI Construction, has retired after a career that included working on historical buildings in downtown Wilmington. (photo by Michael Cline Spencer)
Beth Pancoe can trace her love of construction as far back as early childhood.

“Well, my dad was a Methodist minister, and they didn’t pay ministers anything. So I really never had toys when I was a little girl, but I did have big trees around our house and the roots out of the ground,” Pancoe said, “and I would go out for hours and play with the roots and design in my mind what buildings I was building out of the roots of these trees.

“It just gave me the desire to be creative so I loved it when people would hire me and say, ‘Come to my house or come to my business and let’s talk about how you can make this property work better for me.’”

The retired Wilmington contractor lived in several North Carolina towns because her father would be transferred to a different Methodist church every four years. That, too, contributed to her eventual career.

Pancoe, 81, became one of the first licensed female contractors in Eastern North Carolina in 1987 and built a company focused on historic renovations and home construction. She shut down Wilmington-based SDI Construction, of which she was president, earlier this year and decided to retire after learning in January that she had cancer. Fortunately, the cancer, a type of lymphoma, was declared in remission after six months of chemotherapy, Pancoe said.

Still, she took it as a sign it was time to make a change.

“I hadn’t planned on retiring, but last summer, when I had COVID, I had quarantined in my brother’s home, which I hadn’t sold yet,” said Pancoe, whose brother died two years ago. “While I was there during my morning devotional period I said, ‘Lord, how in the world am I ever gonna think of a way to retire? I’m having so much fun, but I am 80 years old, and this is really probably pretty long to be running a construction company when you’re 80.’”

Pancoe added, laughing as she told the story, “That was in June and July. So isn’t this funny that six months later, I find out I have a tumor. And now’s the time to retire. So I’ve told my friends, ‘Be real careful what you talk to God about.’”

Before she started working in construction, Pancoe was a teacher in Greensboro.

“Being a school teacher really was a good thing for me because I was so shy and quiet,” Pancoe said. “Boy did I have to learn to talk in order to survive. You can’t be shy and quiet when you’ve got a room full of children.”

Before starting SDI, she worked at a company that did smaller construction jobs. Pancoe started selling more and more big construction jobs, compared to the smaller tasks, such as installing windows, that the company had been doing before.

Her boss had promised to get her a secretary and when she asked about it one day, he called Pancoe an “arrogant b––.” To which she replied, “No sir, I’m an assertive woman.”

As a result of that exchange, Pancoe was fired. But it wasn’t the end of her relationship with the firm.

“I used to hire his company to do little jobs that I didn’t like. If I was doing a big remodel or something and we needed handrails, I’d hire his company to do the little handrails, and he just said to me one day, he said, ‘I can’t imagine that you’d use me after I fired you like that.’ And I said, ‘Why not? Your company’s very good at doing little things, and I’m busy doing big things. When I need people to do little things, well, I’m going to turn to your company.’ So we ended up being real good friends,” Pancoe said.

SDI Construction had a hand in numerous downtown Wilmington projects.

“Her real specialty was doing beautiful restoration work, and she has a real list of things that she’s accomplished,” said Charlie Rivenbark, a broker with Wilmington-based commercial real estate firm Cape Fear Commercial and a Wilmington city councilman.

Those accomplishments include restoring the exterior of the Temple of Israel, which was built in 1876, at 1 S. Fourth St. in downtown Wilmington, and completely restoring the DuBois-Boatwright House on South Third Street, a structure that dates back to the 1760s.

SDI also worked on St. Stephen A.M.E. Church at 501 Red Cross St., helping to replace the steeple that was ripped off the roof by Hurricane Florence in September 2018, the Burgwin-Wright House, and the University of North Carolina Wilmington’s Wise Alumni House on Market Street.

In retirement, she plans on traveling, spending more time at her house on the Black River in Harrells and helping her husband, Walter Pancoe, 97, with the business he still conducts.

Investors in Wilmington’s Cargo District recently bought the SDI office building at 1901 Kent St. for $620,000 from Pancoe. Rivenbark was the listing agent in the sale.

The 6,000-square-foot building used to be Delgado Presbyterian Church before Pancoe bought it and renovated it for her company. Pancoe said she believes the Cargo District innovators will bring new life to the building and the area around it.

That’s something she always enjoyed doing as president of SDI.

“I would do design work for the customers, then I’d take it to my engineer who would engineer the whole thing so we know it was done safely,” she said. “Then we got to build those and that to me was probably one of the most fun parts, getting to think of designs and figure out the ways to make things work better.”