On 463-acre Site, Resort-style Rental Community In The Works In Navassa 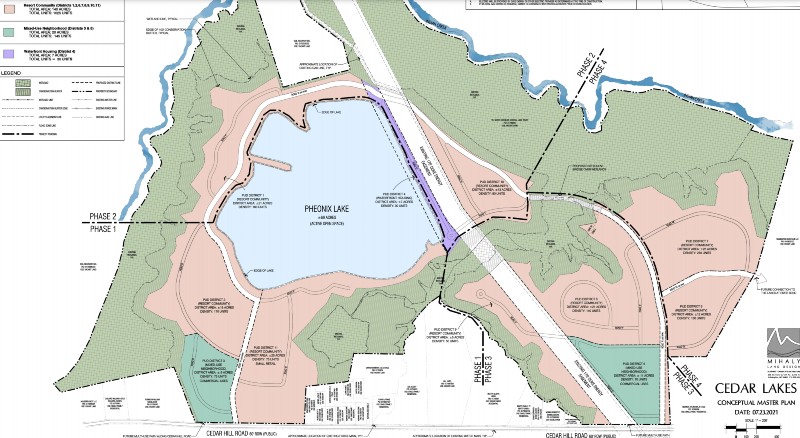 Cedar Lakes in Navassa would be a rental community catering to those seeking recreation, such as vacationers and RV travelers. (Site plan courtesy of the town of Navassa)
A developer wants to build a community with 1,200 lots for rental, resort-style neighborhoods, along with amenities and commercial space, on Cedar Hill Road in Navassa.

For the more than 460-acre project titled, "Cedar Lakes," Wilmington-based Tribute Investment and Development Inc. is seeking a Planned Unit Development (PUD) designation from the town.

The potential Tribute site, which previously held a sand mine, sits between two other PUDs, River Bend and Indian Creek, which are expected to eventually include thousands of homes.

The project is planned on land currently owned by Sand Pit Partners LLC and involves neighborhoods that would be “suitable for single-family, RVs and manufactured homes,” according to the developer’s PUD district application to the town of Navassa.

Districts also include waterfront bungalows as well as portions that are mixed-use with rental residences, potential retail and other features.

According to the developer’s submission, Cedar Lakes would create “a relaxing and recreational lifestyle, while facilitating a sense of environmental interaction with the unique water resources and eco-walking trails. The public will be encouraged to interact with the walking trails, camping sites and lake within and surrounding Cedar Lakes. Each District within Cedar Lakes will be both individually unique and integrated by architecture and landscape with the other Districts.”

Tribute officials hope to start the multi-phased project in the first quarter of 2022, with completion by the end of 2030.

The site contains part of a planned heritage trail that Navassa officials are putting together.

“We were kind of hoping for something [on that site] that would be public-facing [like a campground] and this just happened to come along that was in the same vein as what we thought might be a good use,” said Barnes Sutton, Navassa’s director of planning and development. “One thing that they talked about in the neighborhood meeting that they had with the community was even if you're not renting units or a lot or plot within the development, the amenities are still accessible to the public, so you don't have to stay in the development to the restaurant or set up a meeting at the spa or use the kayak launch or anything like that. There will probably be some type of check-in process for guests... but it's not gated or private in any sense.”

The plan could capitalize on a steep increase in vacationing and desire to be outdoors that the COVID-19 pandemic seemed to inspire.

“Over the last year we've seen a huge investment in recreation, and I think we'll see an accessory bump in tourism, because I just think that people aren't as tied to a location as they used to be, especially with some bigger industries saying, you might not ever have to come back and work in the office if remote has proven to be productive and people can still get their job done."

Sutton noted a jump in “bike ridership, kayak purchases and other things in other communities. So I think this is just a product of recognizing that trend and something that will probably continue in the future.”

The Cedar Lakes proposal is expected to be considered Tuesday by the town of Navassa’s Technical Review Committee and potentially in August by the Navassa Planning Board.