At Former Bank Building In Midtown, The Hemp Farmacy Branches Out 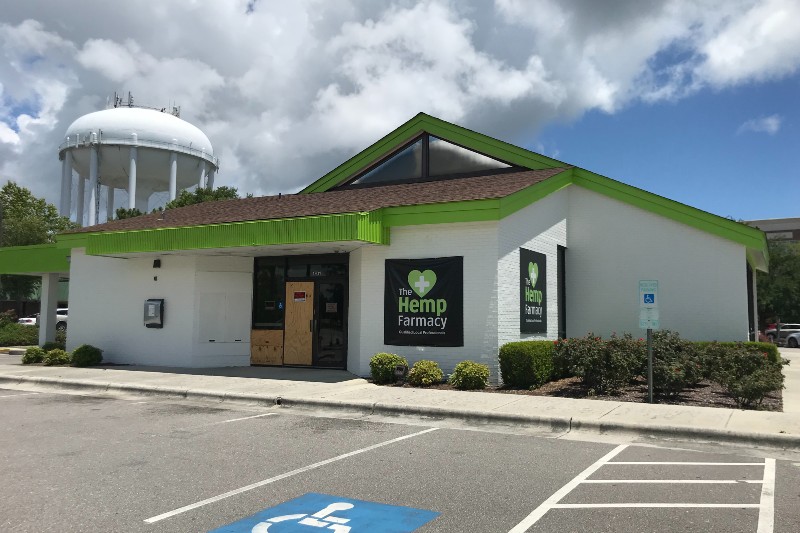 The Hemp Farmacy is opening in a former bank building at the corner of South 17th Street and Shipyard Boulevard in Wilmington. (Photo by Cece Nunn)
The Hemp Farmacy, a business planted in Wilmington in 2016, grows again with its third store in the Port City and eighth location overall.

A seller of cannabinoid-based products, The Hemp Farmacy’s latest store reuses a former bank building at 1701 Shipyard Blvd., on the corner of Shipyard and Wilmington medical corridor South 17th Street.

“This is a new location. We’re not closing any of the other stores. I would say 50% or so of our business is medical referrals and as the medical community has started to embrace cannabis products, that’s a growing demand for us,” said Justin Hamilton, CEO and primary shareholder of Hempleton Investment Group, The Hemp Farmacy’s parent company.

“So we targeted that location because of the exposure on the corner, it fits our franchise model and the proximity to the medical community in Wilmington,” he added.

A quick explainer: Many cannabinoids are derived from hemp. Although related to marijuana plants, hemp plants produce much lower amounts of THC, the chemical compound that produces highs when people smoke or ingest pot.

Cannabinoid-derived products such as CBD, CBN, CBC, Delta 8 and more are sold as treatments for a wide variety of ailments, from inflammation to depression.

The Hemp Farmacy's other local stores are at 123 N. Front St. and 1402-1 S. College Road. Other cities in the state with Hemp Farmacy locations include Fayetteville, Jacksonville and Raleigh.

“We intend to grow more in Wilmington as we identify the right properties to fit the franchise model,” Hamilton said, referring to the type of free-standing, corner location that is opening on Shipyard Boulevard. The midtown Wilmington store could open as early as this week, he said.

One of The Hemp Farmacy’s most popular products launched last year.

“We partnered with a pharmaceutical manufacturer to develop the product line Prolifera,” Hamilton said. “It’s one of the first instant-release tablets that are formulated with individual cannabinoids.”

The tablet form has “been a huge benefit for the older population because they’re not necessarily excited about a tincture or the taste of cannabis, and this delivery method is something they're familiar with,” Hamilton said. “It’s much easier to put a tablet in your pill counter and absorb it in your normal routine.”

“This location [about 3,200-square-feet on Shipyard] will have two additional office spaces for holistic service providers,” in addition to its retail space, Hamilton said.

The Hemp Farmacy has one location in Georgia, opened by a franchisee.

“We opened there right before the coronavirus hit and then we froze franchise sales and still have those frozen to outside people. We’re building corporate locations but have not reopened the franchise sales because of the impact of COVID on retail environments,” Hamilton said. “We don’t want to sell franchise locations when the waters are still so uncharted on the recovery and what that looks like for the retail sector.

"These are very expensive and I don’t want people to invest their life savings in something that’s not proven.”

For now, Hempleton Investment Group is focused on expanding closer to home.

“Our primary growth pattern over the next 12 months will be the state of North Carolina,” Hamilton said. “We will continue to expand every 45 to 60 days with a new location.”