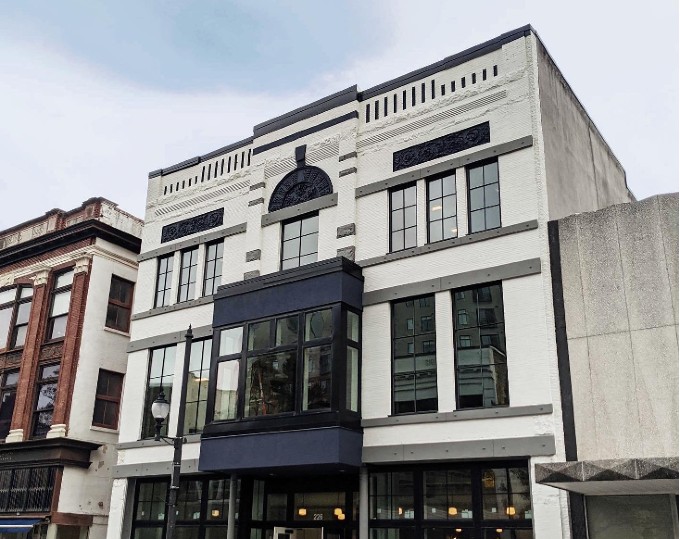 Wide Open Tech, a firm founded about 15 years ago, moved into Common Desk on Monday after previously being housed in different offices around Wilmington. The company is a full-service digital agency that offers software development and digital and content marketing.

"For us, it’s nice to be around other companies that are either startups or smaller companies because 1, that’s our client base, and 2, it’s just a good place to go to exchange ideas," said John Cornelius, founder and CEO of Wide Open Tech.

The company has 10 employees, most in Wilmington with some working remotely.

"On a more practical level we don’t have a really large team, especially now with people working out of the house a lot," Cornelius said, "but it’s good to have a place to come and have conference rooms, a central place for us to meet with ourselves and clients."

“It’s maybe my favorite project I’ve ever been involved with,” said McKay Siegel, project manager for the Wilmington Division of East West Partners, in a news release. “Our design and construction teams brought the Gaylord Building back into the full glory of its heyday, and delivered it into the 21st century as a coworking space that would compete in any primary market.

"From a leasing standpoint, the Common Desk team is and has been incredible at recruiting companies and convincing them that they need to be downtown. Lucien Ellison and I (as East West Partners - Wilmington) were the first members, but every member since is a small business that’s committing to downtown, and that’s fun to be a part of.”

Common Desk, founded in 2012, "specializes in an all-inclusive model of thoughtful and functional amenities," and members "enjoy everything from cocktails to coffee to conference room bookings, at no extra cost outside of their monthly membership prices," the release stated.

Common Desk operates an open network of uniquely-designed coworking spaces, allowing its Wilmington members to use all locations in Dallas, Austin, Houston and coming soon, Raleigh.

The first floor is designed to double as an event space for hosting networking events, happy hours and meetups after hours.

Other amenities include a shared kitchen, wellness room, private chat booths, and flexible space for events and meetings.

Pieces of the more than 100-year-old Gaylord Building’s history have been woven into its design, including a banner from the building’s opening day in 1900, salvaged wood slats from the original department store’s signage, reclaimed wood from old flooring that has been repurposed for shelves and stair treads, and a gallery wall featuring found building artifacts such as books, receipts and bottles, according to the release.

The building’s bay window offers members of Common Desk a view of the riverfront, downtown Wilmington and part of RiverPlace, a 13-story mixed-use project by East West Partners and the city of Wilmington that replaced a defunct parking deck.

"We're big believers in the lifestyle towns that are centered around community building, art and culture and well-being,” said Common Desk founder and CEO Nick Clark in the release. “Wilmington perfectly encompasses all of these things and already has momentum with companies big and small relocating to the city.

"With a lack of existing flexible, turn-key office spaces, Common Desk is excited to bring our workday solutions into the market and play a role in providing space for Wilmington’s professional community."