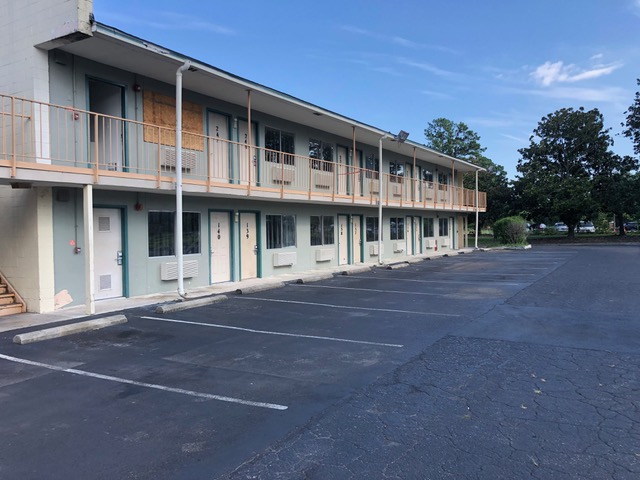 Currently called AmeriVu Inn & Suites, the motel at 2828 Market St. has a new owner and will get a new name. (Photo courtesy of Eastern Carolinas Commercial Real Estate)
A local firm recently bought a 113-room motel on Market Street with the intention of renovating the property.

The AmeriVu Inn & Suites at 2828 Market St. was purchased for $2 million by Wilmington-based Suites on Market LLC. The seller was Echelon Hotels Inc.

The buyer plans to transform the motel from AmeriVu Inn & Suites into the Suites on Market.

The motel was damaged by Hurricane Florence in September 2018, and at the time of its sale on Dec. 18 last year, it had 31 rooms for rent.

Jeremy Bailey of Blue Coast Realty Corp. represented the buyer in the transaction and will manage the Suites on Market.

He said the buyer saw the opportunity to remodel and upgrade a motel in an area that is undergoing some of its own improvements and is close to downtown Wilmington.

"We’re going to be redoing 82 rooms completely and freshening up the outside," Bailey said.

The property had interest from purchasers from the day it was put on the market in August 2019 through the day of the sale closed in December, stated a news release from Eastern Carolinas Commercial Real Estate (ECCRE), a Wilmington-based firm.

The seller was represented by John Hinnant and Nicholas Silivanch of ECCRE.

According to the release, the property's office and institutional zoning designation (O&I) "had several groups looking to transform the property into apartments; however, the city's recent changes to the zoning regulations with the CDMU [Conditional District Mixed Use zoning] made that potential no longer feasible."

The change referred to is the requirement (with exceptions) of 20% commercial space in mixed-use projects in commercial districts and the CDMU zoning designation. City officials have said the change better adheres to the intent of the zoning, which was adopted without a percentage requirement in 2002. That original intent included making it possible for services to be close to where people lived.

On the Market Street motel, the ECCRE release stated that the property "has been a notable marquee location with it being used as a set/location for Hulu’s TV show Reprisal, the feature film Tammy and many other such films/shows over the years."