On Carolina Beach Road, Harris Teeter-anchored Center On The Way

Developer Dean Scarafoni, president of Live Oak Development Co., said The Crossroads at Independence (site plan shown below) and its massive Harris Teeter anchor are expected to be open by April 2022. Most Harris Teeter stores are 53,000 square feet, although their sizes can vary.

The center, which has been in the works for a few years, is coming to the corner of Carolina Beach Road and Independence Boulevard.

“It will be their largest store in the region,” Scarafoni said of the Harris Teeter, “and given how few stores are opening these days, it's a pretty good indication of how they feel about the location.”

The area surrounding the shopping center site, around the 3800 block of Carol 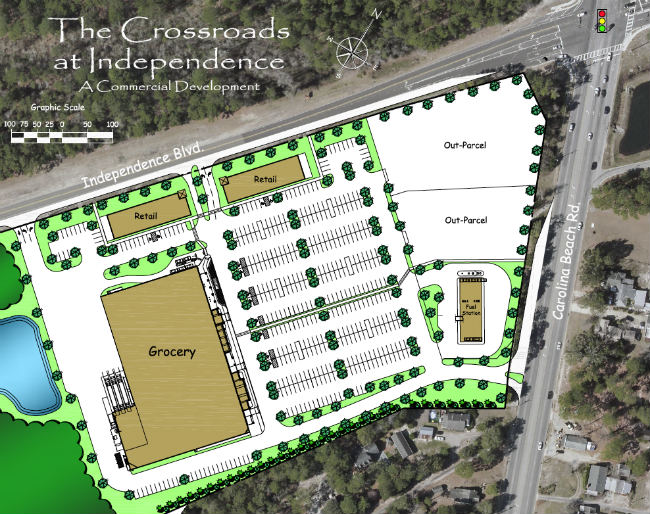 ina Beach Road, is one of the fastest-growing portions of the county, Scarafoni said.

“It's in between all the stuff going on in midtown and Riverlights and the redevelopment of Echo Farms, so you've got a lot of existing population and traffic,” he said.

“We’ve gotten a handful of letters of intent but still have some space available” in the multi-tenant buildings, Scarafoni said.

The site work will be done by Honeycutt Construction Services.