How A Facelift Can Lift A Center 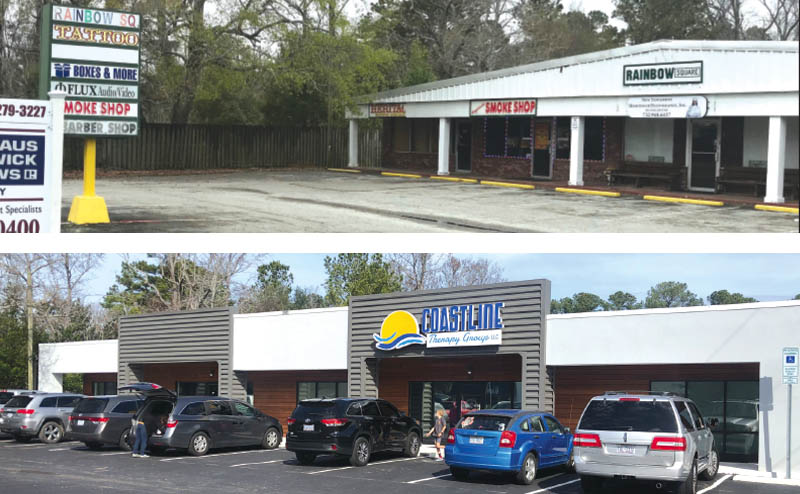 Rainbow Square, a commercial center on Wrightsville Avenue, has been revamped and has a new tenant.
Sometimes it seems like everything old is new again in Wilmington.

Well, not everything. And not completely new.

Two major examples of older shopping centers in the Wilmington area that are getting major facelifts and changes are both on Oleander Drive: Independence Mall, a 1970s-era center where additions will include restaurants, along with exterior-facing stores on the Oleander side, and Hanover Center, a shopping complex that opened in 1956, where plans are in the works for changes.

But not all projects to refurbish older commercial centers in the Wilmington area are as large as those.

For example: Rainbow Square, a small strip center built in 1974 at 3901 Wrightsville Ave. in Wilmington, was gutted and revamped, and now has a new facade, new sign and a new tenant.

Before its transformation, the property was in need of a lot of attention, including being brought up to code, said listing agent Steve Hall, partner with Wilmington-based commercial real estate firm Maus, Warwick, Matthews & Co.

The change could lead to more updates in an area that is already transforming, Hall said.

“I think the improvements will progress the closer you get to Independence Boulevard and the Covil Avenue intersection,” he said. “As you ride down there, you’ll start seeing some really cool changes.”

Such changes benefit a property and its landlord.

“Updating a center can increase its value,” said Cal Morgan, owner of commercial real estate appraisal firm JC Morgan in Wilmington, “especially now that the market has continued to improve and economic conditions are good.”

Morgan said Odgen Plaza Shopping Center, in the 6800 block of Market Street, is a good example.

“It was an older looking shopping center that was losing tenants, and so the ownership went in, spent some money and made it basically look like a new shopping center,” Morgan said.

At Ogden Plaza, 80% of the center got a new facade with new storefronts, a deeper canopy and enhanced hardscape features.

BMH Architects was the project architect, and Monteith Construction was the general contractor overseeing the improvements.

Last year, Planet Fitness signed a 10-year lease at Ogden Plaza, in the space formerly occupied by Harris Teeter that closed in 2018.

Originally built in 1980, and significantly remodeled in 2018, Ogden Plaza “has been at the forefront of the Ogden retail trade area for decades,” according to a Cameron Management news release last year that announced the Planet Fitness lease.

With the addition of the Planet Fitness lease, occupancy at Ogden Plaza rose above 80%.

Seaside Fitness, an affiliate of Anchor Management, planned to invest over $2.8 million in the Ogden Plaza location of Planet Fitness “to make this a best-in-class health club.”

Hill Rogers, broker in charge with Cameron Management, said in last year’s release about Ogden Plaza, “The owners decided to make a considerable re-investment in the property [in 2018] because we believed in its location, even though we knew Harris Teeter was going to ultimately vacate. That investment has reaped dividends with new leases with Ashley Furniture, Islands Fresh Mex Grill and now Planet Fitness.”

At Rainbow Square, Coastline Therapy Group is the new tenant, offering occupational, speech and physical therapy in one portion of the center, while another part of Rainbow Square is for lease.

The rear of the property is going to be used for the clubhouse and leasing office for student housing complex Elevation Apartments, also owned by Tribute, Hall said.

In the commercial center, “We have 3,200 square feet left that will be great for an office or light retail user, which could be subdivided into two, 1,600-square-feet sections if need be.”

Not all commercial centers can or will be upgraded, but that can also have benefits for the Wilmington area. An aging shopping center on South Kerr Avenue was torn down to make way for much-in-demand student housing, for example.

But according to a PlanGrid Construction Activity Blog post last year, “Adaptive reuse is a massive trend these days.” While some companies are only interested in creating new buildings, “retail construction includes a large portion of renovations and refreshes of existing structures,” the blog stated.

That can be especially true in areas where land is becoming more scarce and more expensive, such as the city of Wilmington. According to a report based on last year’s retail market by CoStar, a provider of information, analytics and marketing services to the commercial real estate industry, “Local population growth in Wilmington has contributed to a larger customer base in the metro and to increased demand for retail services. Retailers have responded by leasing more space in Wilmington in recent years, contributing to falling vacancies in the metro.

“Construction in the metro has generally been outpaced by leasing, allowing further compression.”

Morgan said that in general a number of factors come into play when a landlord is considering improvements and updates to a center. He said, “The estimated expenses of any proposed renovation must be supported by the increase in lease rates the renovation will generate.”

Morgan said that doesn’t mean rents will increase significantly in every situation. He said, “Every renovation will be different. But they [landlords] want to make an adequate return on their investment.”