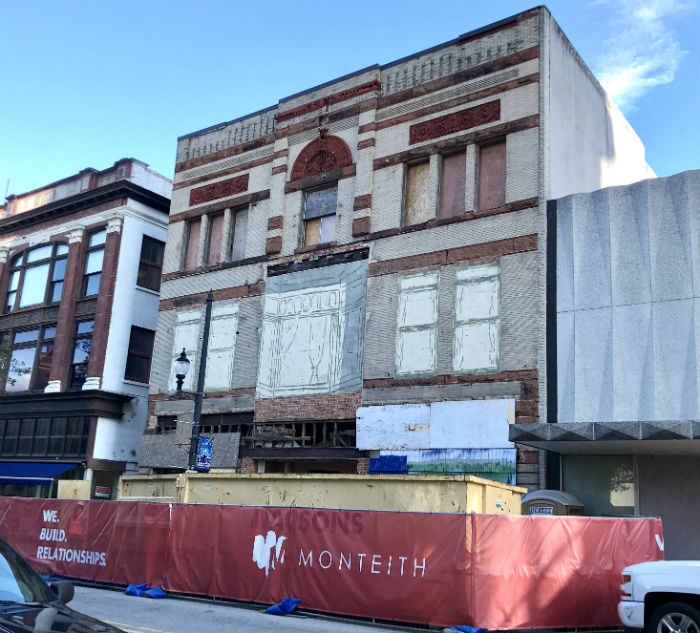 The historic Gaylord Building on North Front Street in downtown Wilmington is undergoing a restoration ahead of its use as coworking space. (Photo by Cece Nunn)

East West Partners, the Chapel Hill-based firm involved in a public-private partnership with the city of Wilmington to redevelop the former site of the old Water Street parking deck into the 13-story mixed-use building River Place, bought the Gaylord Building for $975,000 in 2018 with the intent of turning it into office space.

For the next 10 months, East West Partners plans to restore portions of the building’s exterior to its original style, according to a press release. Construction started in November.

“We will be restoring portions of the Gaylord’s original historic Front Street facade, while introducing a thoroughly contemporary interior design to accommodate the flexible and hospitable office environment today’s entrepreneurs prefer,” Lucien Ellison, managing partner with East West Partners, said in the release.

The work “will include a second-floor bay window that extended over the sidewalk, a prominent architectural element on the Front Street facade (shown at left in a photo from New Hanover Public Library), that also provided shade and rain cover to pedestrians,” the release stated.

George Gaylord built the building in 1900 for his department store. It later housed a Belk and then Walgreens.

East West is partnering with Common Desk, a coworking firm founded in 2012 that has 10 locations. The company is expanding its presence outside of Texas for the first time this year by moving into the North Carolina market. Its initial location in the state will be in Raleigh’s East End Market development, according to the company, which raised its first round of funding last year.

The Wilmington spot is expected to open by the end of the year.

Common Desk will fill 22,000 square feet of space and offer different levels of coworking memberships, from a basic level for shared desks to reserved desks to private offices to team offices that can accommodate between three and 15 employees, according to the press release. Conference rooms are planned, as is event space open for reservations by outside groups.

“Wilmington has an entrepreneurial spirit that we love, paired with a sense of people being known for what they do after work and not necessarily what they do for work. Common Desk exists in this intersection of work and play, which is where we feel Wilmington also thrives,” Common Desk founder and CEO Nick Clark said in the release.

“Renovating and activating this long dormant building is a major milestone for Downtown Wilmington’s economic development efforts and will add much needed coworking space to the center city,” Ed Wolverton, executive director of Wilmington Downtown Inc., said in the release.