On Market Street, Battleship Cycles & Marine Revs Up To Open In The Fall 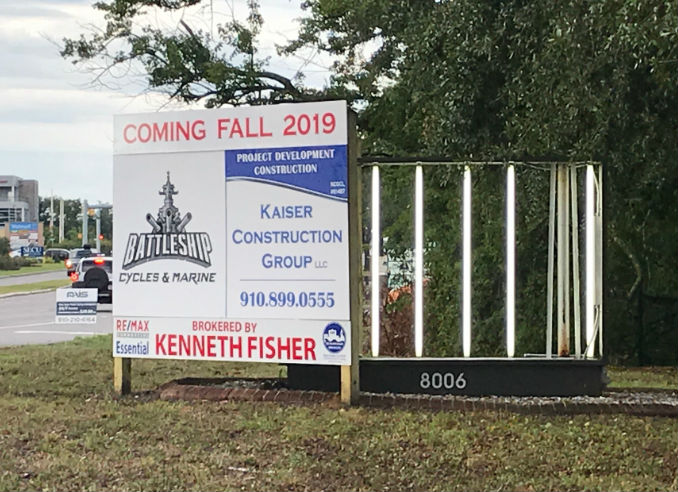 Carson Baker, owner of two businesses in Fayetteville, plans to open Battleship Cycles & Marine on Market Street in the fall. (Photo by Christina Haley O'Neal)
At first, Carson Baker's shop in the Wilmington area was just going to be a motorcycle store, selling pre-owned and Indian brand motorcycles.

But then, said Baker, who owns Baker American Cycles and Baker Motorsports in Fayetteville, "we added a pontoon brand, and we said, 'OK, we'll be a motorcycle store that sells pontoons.' And then other manufacturers started contacting us, and now we're a boat store that sells Indian Motorcycles."

"I originally wanted to come to Wilmington when I got out of college [in Myrtle Beach, South Carolina], and this was just an opportunity for us to expand in a town I'd like to live in," Baker said. "It's a great town. There's always something going on, whether it's hot or cold. It's on the water, and who doesn't want to be on the water?

"And I've always liked boats, so it's something that kept growing."

Real estate isn't easy to find in Wilmington, Baker said. But he was able to purchase a 10,000-square-foot building on 1.5 acres that formerly held a second location for Uptown Market for $1.1 million in May, according to property tax records.

Kenneth Fisher of RE/MAX Essential in Wilmington represented Baker in the transaction.

Kaiser Construction Group is the contractor for Battleship Cycles & Marine.

The name of the business was inspired, of course, by the Wilmington landmark, the Battleship North Carolina.

"That's one of my favorite things" to do in the Port City, Baker said of touring the battleship.

The store will have 7 to 10 employees, he said, and is expected to open near the end of September or beginning of October.