The latest rendering for the commercial buildings at Arboretum West, off Military Cutoff Road. The Port City Java with a drive-through will be located in the smaller building on the right. (Rendering courtesy of Tribute Properties)

Wilmington-based coffee chain Port City Java is the first business to sign a lease for space at Arboretum West, the mixed-use apartment community under construction off Military Cutoff Road.

In addition to 360 apartments, Arboretum West will contain two commercial buildings with 18,000 square feet. The smaller of the two buildings will hold the Port City Java and its drive-thru.

"With the Military Cutoff Extension that's coming into play, for the traffic that's going to feed down from the extension straight into Military Cutoff, this will be the first retail center that you're going to see," said Steve Hall, partner with Maus, Warwick, Matthews & Co., the listing agent for the Arboretum West commercial space.

"Arboretum West will have a right in and out access off Military Cutoff Road and full-service signal at Station Road, which gives the morning commuters easy access to the development and Port City Java’s drive-thru location," he said.

Currently, there is no Port City Java location in the Landfall/Mayfaire submarket after the chain's Lumina Station shop closed in September last year.

As for the remaining commercial space at Arboretum West, 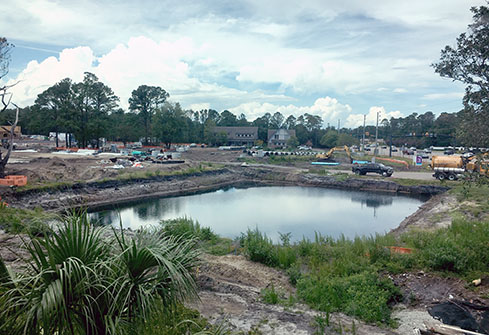 including a 3,300-square-foot restaurant, Hall said, "We're working with several potential tenants and are in negotiations for some of those spaces."

The restaurant portion of the largest commercial building also has 2,000 square feet in a covered patio with a fireplace.

Crews are working on Arboretum West now (construction site shown right), and the developer hopes the commercial space will be complete by the first quarter of 2020, Hall said.