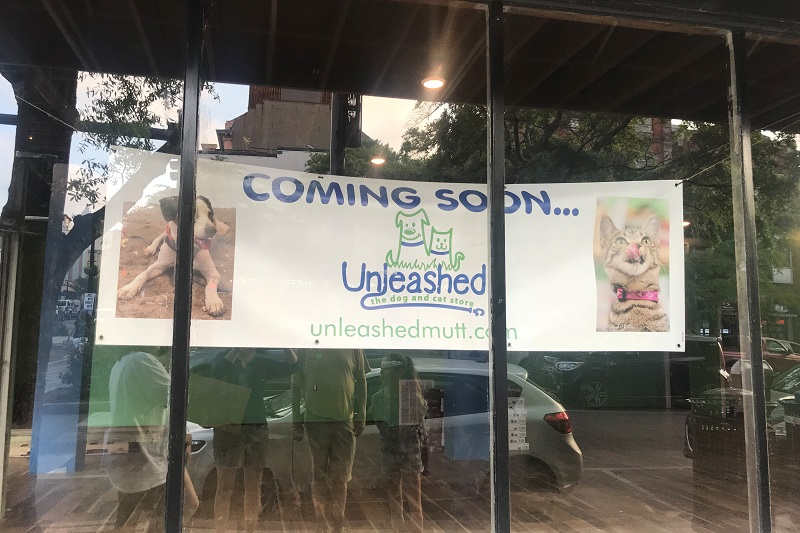 Unleashed on Front is set to open in downtown Wilmington. (Photo by Cece Nunn)

Unleashed owner and Raleigh-area local JP Phinney is in Wilmington this week to upfit the company’s new downtown space slated to open in June.

Unleashed, the Dog and Cat Store, a retail shop offering pet supplies and services, has leased a three-story space at 2 S. Front St., under the longtime ownership of the Finkelstein's family, according to Terry Espy of MoMentum Companies, the broker involved in the lease transaction along with her son Kennan Espy.

“We’re happy that Unleashed is here and getting ready to open … I think they are going to be a great asset to downtown,” said Bobby Hamelburg, owner and operator of the Finkelstein Music retail store at 6 S. Front St. who owns the building along with his wife, Judy, who is part of the Finkelstein's family.

The space, inside the building at Front and Market streets, opened up when Hamelburg decided to consolidate the retail business.

“We put a wall up where it was 35 years ago before we expanded back to the corner … now at this point, we don’t need the space as much for big PA systems and things like that,” he said. “And so that’s why we kind of consolidated.”

Espy said the consolidation opened up about 1,450 square feet on the first floor, along with 970 square feet each on the two upper floors. The space was put up for lease in July 2018, she said.

The first level will be used as retail space, the second as a community space for activities such as puppy play dates and social hours and the third will be used for storage, JP Phinney said.

Phinney, who owns the Raleigh-based company with his wife, Amy, said they have been eyeing downtown Wilmington for some time and had considered a spot inside the River Place development on Water Street, which is currently under construction.

“But new construction, we discovered, was not really our thing. We like to fit our stores into a space that’s already there … because we are still very, very mom-and-pop. In fact, the upfit that we are doing in Unleashed on Front … has been exclusively done by me and Amy,” JP Phinney said.

After searching, the Phinneys quickly acted on the space left open by the Finkelstein's consolidation, looking into the property in late April and signing the lease in early May.

According to Espy, the lease had been marketed with a specific type of tenant in mind. Well over a hundred inquiries about the property had come in the months after it was put on the market, she said.

With all the bars and restaurants downtown, another retail store “was a good fit for us,” Hamelburg said of their new tenant.

JP Phinney said he hopes to open the downtown store by June 24. The retail shop would employ about three part-time and three full-time employees. The company employs more than 50 full- and part-time workers in total.

Unleashed on Front will be the Phinney’s second location in Wilmington. The other is at Landfall Shopping Center, where the store has been since 2012. Unleashed will have eight stores total with its downtown Wilmington opening; the others are in Cary and Raleigh.