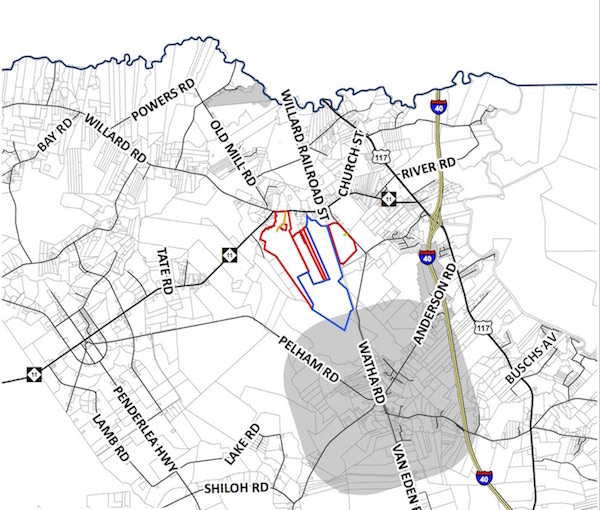 This map shows the site of the new solar installation (outlined in red and in blue), which were approved through an SUP process. (Image courtesy of Pender County)
A 1,046-acre tract in northern Pender County is under construction, being transformed into a solar farm to power all U.S. operations of Danish pharmaceutical company Novo Nordisk. Those operations include an expanding pharmaceutical manufacturing plant in Johnston County.

Confirmation of the project from Novo Nordisk comes on the heels of the company’s recent announcement that it will achieve its goal of using only renewable electricity in its global production facilities by 2020. The solar panel installation near the Pender County community of Watha will cover 672 acres of the site, roughly the size of 500 football fields.

Developed and constructed by California-based Cypress Creek Renewables, the solar panel installation will be one of North Carolina's largest solar sites, according to Novo Nordisk's news release, which added that the project is creating about 900 construction-related jobs.

About 150 of those jobs are held by local construction workers, according to Cypress Creek Renewables spokeswoman Ally Copple.

“Cypress Creek is proud to support Novo Nordisk’s renewable energy commitment with solar energy sourced near the company’s new manufacturing facility under construction in Clayton, North Carolina,” Chris Norqual, vice president, Cypress Creek Renewables, said in a statement. “We look forward to continuing to work with and invest in the Pender County community and the Cape Fear region of North Carolina.”

Approval of using the property for a solar installation came at the end of a special use permit process, Pender County's planning and community development director Kyle Breuer said Wednesday. In that process, the county determined that although the property in question was arable, it was not designated as prime farmland.

When industrial projects are proposed, Breuer said, “We do look at the loss of agricultural land and try to be sensitive to that. We require applicants to register a decommissioning plan, so that if the project becomes nonviable, the land can be restored to farmland.”

The 105 megawatts of electricity generated from this installation, beginning late this calendar year, will provide power to Novo Nordisk’s entire U.S. operations, the company announced in a news release.

Last year, Novo Nordisk U.S. production sites in Clayton and New Hampshire emitted 13,460 tons of CO2 from electricity use, according to the release. With the new solar project, the company's net CO2 emissions from electricity will go down to zero.