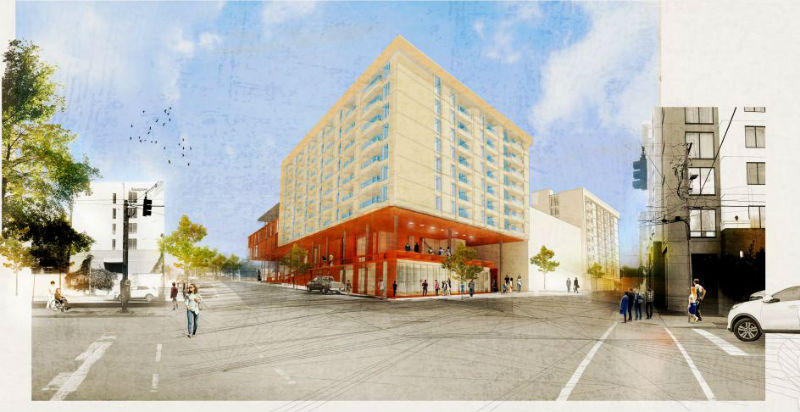 According to the Project Grace development proposal, the project would include 84,000 square feet of library, museum and shared space as well as 250 residential units. (Screenshot courtesy of New Hanover County)
Faced with only one developer response to the county’s Request for Proposal and many questions about projected costs and potential revenues, New Hanover County Commissioners voted unanimously at their meeting Monday to consider multiple options for the downtown development known as Project Grace.

The discussion of Project Grace, county-owned block in downtown Wilmington, began with Commissioner Julia Olson-Boseman expressing skepticism about the project’s financial viability and return on investment to the county.

Earlier this year, county officials moved ahead with Zimmer Development Corp.'s proposal to transform the county-owned block bordered by Grace, Third, Chestnut and Second streets that includes a parking garage, the main branch of the New Hanover County Public Library and surface parking. The developer was the only one to respond to the county's RFP for the public-private partnership.

Commissioner Pat Kusek elaborated in an email Tuesday on her reaction to Zimmer’s proposal.

“More than 18 months ago we were presented with several options on the possibility of developing that block,” she wrote. “At that time we were also presented with preliminary numbers of an investment of $20 million with a 20-year payback.

“In the last several weeks I have looked deep into the numbers that are now in front of us and find that the $20M was simply for a box, if you will; it did not include any upfit for exhibit space, library, conference rooms, storage, offices, etc. So that number now is more than $50 million with an annual debt service of $1.8 million. Those are staggering numbers to me, and I believe that it is imperative for us to reexamine this project for alternatives.”

Kusek and the other commissioners weighed in on the topic at Monday’s meeting, each agreeing that Zimmer’s proposal was not acceptable. But they acknowledged that negotiations with Zimmer could possibly bring costs down and increase financial benefits to the county.

That block is bordered by Second, Third, Chestnut and Grace streets, and contains the county’s downtown library, the former Register of Deeds office, a parking deck and parking lot, and a small plaza. A preliminary concept called for redeveloping the block to contain the library, a new Cape Fear Museum facility and some commercial space – possibly offices, residences, retail or a hotel.

Commissioner Woody White advocated for a multi-pronged approach to the current situation.

White said the county would not be discharging its fiduciary responsibilities if it did not determine the highest and best use for this parcel and all others it owns.

At this point, White continued, no one has committed anything except “a modest amount of money” to Project Grace, in terms of commissioning a study and market analysis. He believes that the expenditure was a good one, because it has brought attention to the site and its potential and the need to plan for the future needs of the library and the Cape Fear Museum.

White said he could not support the Zimmer proposal at this point, although he sees “tremendous value in the Project Grace conversation.”

Ultimately, the commissioners voted to pursue two tracks on Project Grace: proceeding on a path of negotiations with Zimmer while exploring alternatives for that space and for future renovations to the Cape Fear Museum.

Those alternatives, Kusek wrote Tuesday, “would include the county keeping the library as-is for the next five years (which is when we are told that it will need less than $2 million to remodel), keeping space for a possible home for the museum, and perhaps selling the remainder of the block for development. It also would mean the possibility of doing nothing for the time being.

“These are big investments for our taxpayers and we need to be strategic in our thinking and mindful of the highest and best use of taxpayer dollars,” she concluded.

At the end of Monday’s meeting, County Manager Chris Coudriet summed up his charge from the commissioners.

“The deal as presented [by Zimmer] is not a good financial deal. There are known costs about what a museum and a library would cost, and that’s real money, and we need to factor for it,” he said, adding that the county would need to lower these costs and/or find partners to share the expense.

As to the county-owned block downtown, Coudriet said, “Think about options of reconfigurating what’s on the site, as long as it has some element of public purpose and has some private development.”

A fundamental part of the eventual plan will determine what entity will own the parcel of land as well as the improvements, and at what cost, Coudriet concluded.

A community forum about Project Grace will be held May 9 to provide more exploratory and general financial information for the project, the county announced in a news release. Attendees will be able to ask questions and speak at the meeting in a facilitated community conversation. The forum will be held 6-7:30 p.m. in the auditorium at Cape Fear Community College’s Union Station, 502 N. Front St.