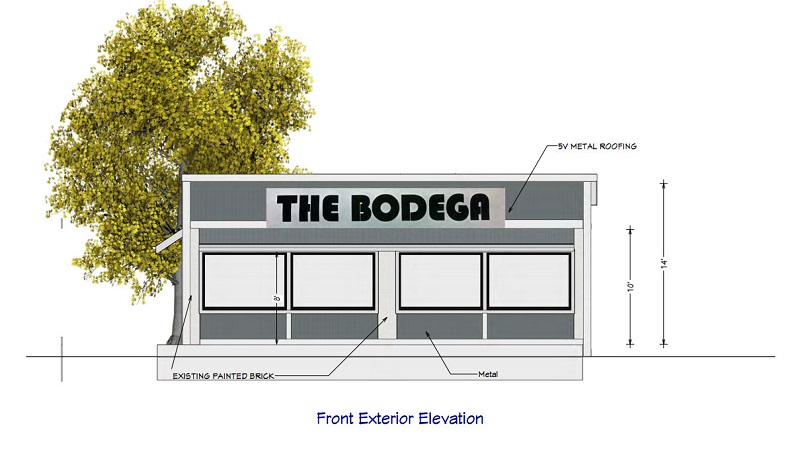 An applicant is requesting demolition at a building on Third Street, with plans for retail or neighborhood grocery store. (Rendering from city documents)
A South Third Street building, planned for future retail or grocery store, is on the agenda for Wilmington's Historic Preservation Commission's next meeting.

An applicant has submitted a proposal to the commission to reduce the 90-day stay of demolition for a portion of a commercial building at 1222 S. Third St., which is in the Wilmington National Register Historic District. The request on the agenda for the commission's meeting Thursday, according to city documents.

The applicant is C. Ryan Horne with Seagate Holding Co. LLC in Wilmington, which bought the property in August.

Plans are to remove the roof and front façade and upfit the building for light retail/neighborhood grocery store and produce, according to a Jan. 3 letter signed by Horne in the documents.

The applicant plans to keep the existing concrete slab floor and brick walls of the building.

Horne stated in the letter that there is a planned addition of 500 square feet to the building that will "complement the existing structure and neighborhood."

The letter states that the building is deteriorating and had damage to the roof during Hurricane Florence. Horne also states that it is too expensive to restore the deteriorated building for its planned use.

According to the land development code cited in the agenda for demolition in a national register historic district, no building or structure in the portion of a historic structure may be demolished or removed until the owner has given the commission 90-days written notice.

"The maximum notice period shall be reduced by the commission where it finds that the owner would suffer extreme hardship or be permanently deprived of all beneficial use or return from such property by virtue of the delay," states the code.

If the commission decides to reduce the 90-day stay of demolition, the documents list a condition that the owner donates historic architectural components of the building to the commission or a local nonprofit entity for reuse.

The structure was part of a commercial addition between 1915 and 1951 to an existing one-story dwelling on the property that was demolished between 1998 and 2002, according to the city's record.

The commission will meet at 5:30 p.m. Thursday in the city council's chambers at Thalian Hall, 102 N. Third St. in downtown Wilmington.