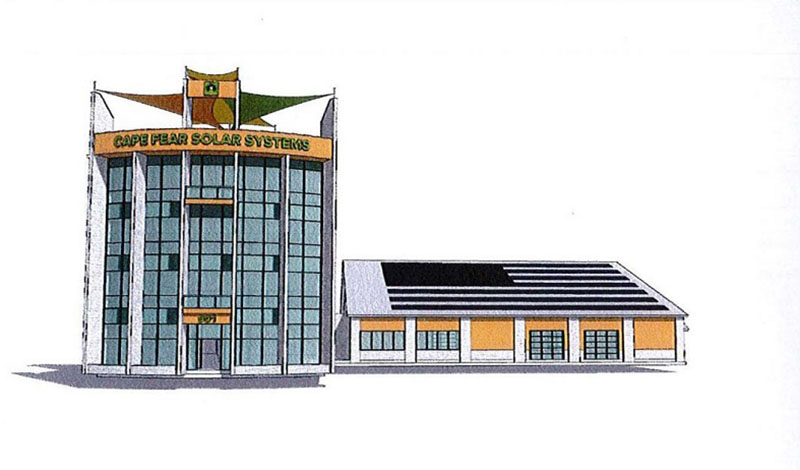 A rendering for a Cape Fear Solar System project shows a proposed building. (Rendering from the city of Wilmington
A public hearing on a special use permit for a solar system design and installation company's proposed office building on Front Street is scheduled to take place next week.

The applicant for the project is Cape Fear Solar Systems, which wants to build on 2.6 acres of vacant property at 901 S. Front St., according to city agenda documents.

According to city documents, the project's first phase would include a five-story, 75-foot-tall building for nearly 31,000 square feet of office space and nearly 15,000 square feet of warehouse space. The warehouse would be used to store solar system kits before they are sent out on deliveries, the agenda documents state.

There is also a proposed roof deck area on the building with seating and an enclosed lobby lounge and roof garden.

A second phase of the proposed project calls for a “net zero solar house exhibit” used for marketing and educational use, the documents state. It would also include solar-powered car charging stations.

Cassandra Barba, Cape Fear Solar Systems sales and marketing manager, said an email Friday that the company is in the early development stages and will not be formalizing any plans until after the city council meeting.

“If approved, the proposed building will allow us to serve more customers while operating with a neutral carbon footprint,” Barba stated in the email.

The property is “an important gateway site as viewed by those entering the City across the Cape Fear Memorial Bridge from the west,” City Manager Sterling Cheatham said in a note to the council. The project is located in a Mixed-Use District.

Council members will weigh whether to grant a special use permit, which would allow the building to be up to 75 feet tall. The special use permit also is required because the project's square footage calls for industrial and manufacturing use in more than 10,000 square feet in the district.

If the permit is not approved, the project would have to shrink down to four stories for the office building, or 45 feet high.

During a Jan. 9 Planning Commission meeting, an architect for the proposed project referred to the plans and the intent of the project to be a “solar campus.”

He added at the time that there are plans for tours of the facility, and said, “We intend for this to be a demonstration facility to show a lot of cutting-edge technology."

The Planning Commission recommended conditional approval of the special use permit, according to the city's agenda.

With the public hearing, the city could take action on the special use permit next week, said Dylan Lee, spokesman for the city of Wilmington.