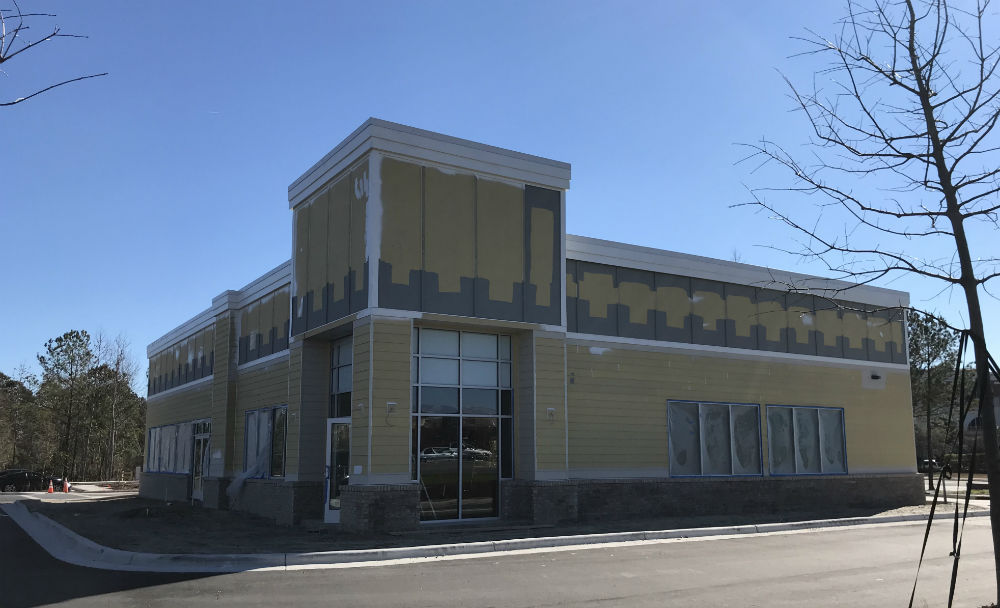 A building under construction at the corner of Sir Tyler Drive and Military Cutoff Road in Renaissance Market will hold a Starbucks coffee shop and drive-thru and a Verizon store. (Photo by Cece Nunn)
Starbucks and Verizon are leaving the Mayfaire shopping centers where they're currently located along Military Cutoff Road for space across the road in Renaissance Market, a new center anchored by an Earth Fare grocery store.

The new Renaissance Market tenants will be located in the building under construction on the center's outparcel at the corner of Sir Tyler Drive and Military Cutoff, giving the Starbucks coffee shop a drive-thru.

Organic grocer Earth Fare opened at the center in November and West Marine, and Blaze Pizza opened there the following month.

"Our ability to recruit three highly sought-after national tenants from three different successful centers in Wilmington is a testament to Renaissance Market's location, the improved access and strong visibility. Customers appreciate the ability to get in an out quickly and safely," said Randy Kelley of Harbour Retail Partners, which developed Renaissance Market with Trask Land Company.

West Marine relocated from Lumina Commons, Starbucks will be relocating from a building at Mayfaire Town Center, and Verizon will be moving from its spot next to Panera Bread in Mayfaire Community Center.

For Mayfaire Town Center, the announcement that Starbucks is leaving marks the third national chain departure from the center to become public this month. The others are fashion retailers Eddie Bauer, which closed Thursday, and J. Crew, although those stores announced closings rather than relocations.

The new Starbucks location at Renaissance Market will be about 2,261 square feet, and Verizon will have about 2,344 square feet there, according to a news release.

The Starbucks and Verizon locations are expected to open in May. With those leases, there is only one space left in the shopping center, a 1,400-square-foot spot next to Earth Fare.

"I think the location really helped us create that quick absorption," said Raiford Trask III of Trask Land Company. "And also the synergy -- that's a good group of tenants."