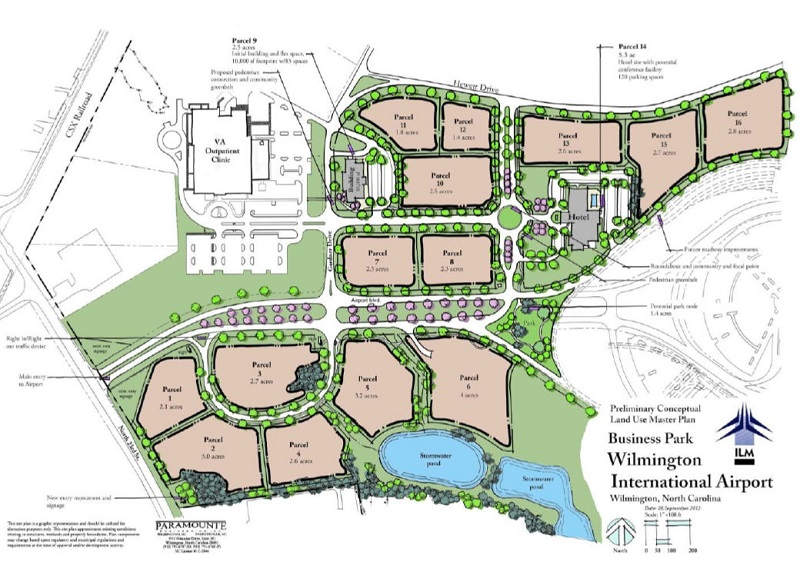 A conceptual land use plan is shown in this rendering of the ILM Business Park, which includes a space for a possible hotel. (Photo courtesy of ILM)
Available building space within the Wilmington International Airport’s business park is nearly full with the latest additions of two new tenants.

The new tenants are taking up space within two separate buildings, she said.

Available building space is now nearing full capacity at the business park with just 2,880 square feet left open inside the flex building at 1724 Gardner Drive, which can be divided into two, 1,440-square-foot spaces, LeTellier said.

Two other businesses, however, have expressed interested in the last bit of building space, she added.

"We have an interesting mix of tenants," LeTellier said. "I have been really busy with all those properties."

Fat Cat Pottery, a pottery store and workshop owned by Mary Holden-Hall, is relocating to the business park inside a 4,000-square-foot standalone building at 2500 Blue Clay Road, she said.

“The lady that owns it has been doing it for 16 years, and she has been about 8 miles south of the airport,” LeTellier said of the tenant’s space from which it is relocating. “She is really excited about [the move].”

The pottery business is leasing the space on a five-year term with an annual rent of $34,000. The tenant was represented by Keith Austin of Maus, Warwick, Matthews and Co., according to the authority's agenda.

Few Moves, which provides residential and commercial moving services, is leasing about 7,000 square feet of office and warehouse space at 2610 N. 23rd St. for an average annual rent of $52,000 per year. Few Moves was represented by The CRESS Group of Coldwell Banker Commercial Sun Coast Partners, agenda documents showed.

Few Moves is relocating to the business park from its Wilmington location, LeTellier said. The company has a location on Oleander Drive and offices in Raleigh.

“I’m sure people will pull in there, and they will get some nice retail traffic too,” she said of the Few Moves spot, which is near the entrance of the airport.

Although most available building space inventory at ILM's business park is taken up, there are still more than 100 acres at the park left to be developed.

Of the 140-acre park, she said, about 110 acres are available for development in anywhere from 2-acre to 20-acre tracts.

"I would love to have a developer come in and do a couple of spec buildings. I get so many inquiries for freestanding buildings. I wish I had more inventory," LeTellier said, adding that she is also interested in seeing build-to-suits there.

Some interest, however, is gaining traction for the development of a 100-room hotel on business park property.

"There are three different parties interested in getting more information about the hotel," LeTellier said Monday.

The inquiries are from developers who have developed hotels before, she said. Some meetings are scheduled to take place this week.

Whether or not anything will come out of those meetings, time will tell, LeTellier said, adding, "I think that says something about our market.”