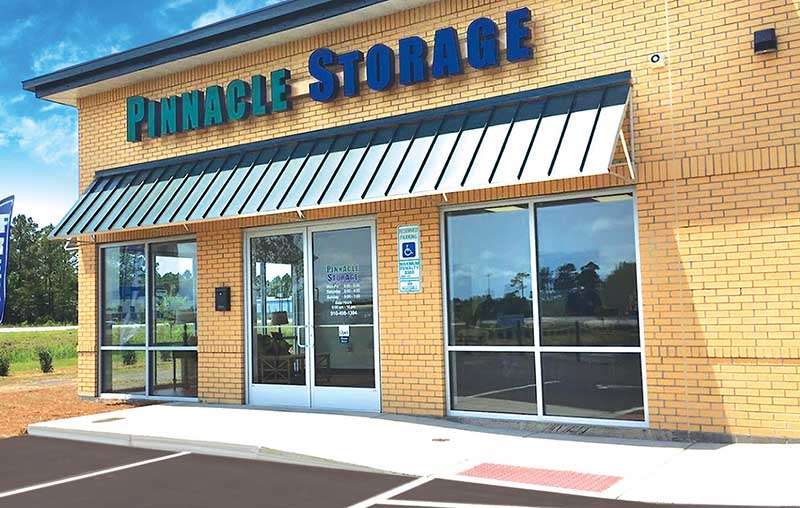 Americans have a lot of it, and residents in the Wilmington area are not an exception.

But accumulating things isn’t always the reason storage units fill up. For the Cape Fear region and beyond, the damage caused by Hurricane Florence in September made needing a place to store belongings a necessity for a lot of people.

“Due to the storm, basically everybody is pretty much filled up, the majority of the facilities,” said Robert High of Coastal Mini Storage, soon to be completely renamed Pinnacle Storage. “It’s pretty much affected from Wilmington all the way up and down the coast to Georgetown [in South Carolina].

“The normal growth is now being pinched because the facilities are full.”

High also owns Robert High Development, through which he builds self-storage facilities for other owners.

He said the reason for the noticeable increase in self-storage projects in the Wilmington area in recent years is simple: supply and demand.

“There was probably a little bit of a lack of supply for several years, and then the population increased. There’s segments of Wilmington [geographical areas] that were not served well for storage,” High said. “Others might have a little bit of excess supply, but there’s still areas that need supply.”

That’s because of how far self-storage users are willing to travel.

Downtown Wilmington has hardly any supply, he explained, and Gordon Road needs more.
His facility on Gordon Road is undergoing a 60,000-square-foot expansion that is expected to be finished in about two months.

The N.C. Self Storage Association held its Southeastern Self Storage Convention & Trade Show at the Hotel Ballast in Wilmington in November, with about 250 attendees and 50 vendors, High said. Convention discussions included using social media, leases, liens and demographics, which High said is a mix that includes commercial uses, first-time homebuyers, baby boomers and college students.

They’ve been increasingly viewed as a good investment, according to brokers, buyers and recent sales.

In November, NSA Property Holdings LLC purchased a self-storage facility on 5 acres at 4851 Carolina Beach Road in Wilmington for nearly $8 million. The buyer, based in Greenwood Village, Colorado, is an affiliate of real estate investment trust National Storage Affiliates Trust (NSAT), according to an Inside Self-Storage article.

A company headquartered in Charlotte purchased The Vault on 17th, a 76,000-square-foot self-storage facility at 1113 S. 17th St. in Wilmington, for $8 million in September.

The Vault, which will be rebranded under Madison Capital’s Go Store it brand, opened in July and represented the first self-storage development project for the GHK-Crete partnership.

“This acquisition presented a unique opportunity for Go Store It that allowed us to expand our presence in Wilmington, which is a target market for us,” said Neil Dyer, Madison Capital Group’s director of acquisitions. “There’s big demand for high-quality storage and the Wilmington market has high barriers to entry as well.”

Those barriers include an increasing lack of available land for development.

The company has two other Go Store It facilities in the Wilmington area, one on Market Street and the other in Leland.

“As with any long-term investment or business venture, you must be receptive and open to evolving opportunities. In this case, Madison Capital Group and Go Store It made a compelling offer, and we were further assured that our customers would be well taken care of,” said Mike Brown, managing member of The Vault on 17th and a partner with GHK Cape Fear Development. “The Vault Self Storage remains interested in other opportunities to purchase or develop class-A, self-storage facilities in underserved submarkets throughout the region.”

He said self-storage supply was out of sync with demand in the Wilmington area, and new projects across the Port City and in the Cape Fear region have been aiming to absorb some of that demand, especially over the past 48 months.

Some national firms project that supply and demand across the U.S. for self-storage could reach equilibrium over the next 18 months, but every area is different, including submarkets in and around Wilmington, he said.

“We’re still on the lookout, and if we see sites that have the right market dynamics, if we found a good site where the numbers looked good from a demand standpoint versus supply, we would certainly be interested,” Brown said.

Evan Stephens, senior analyst with Madison Capital Group, said a lot of the statistics published by leading research firms reference things such as dollars spent on construction of self-storage facilities over the past few years as a proxy for supply.

“We still feel like there’s quite a bit of unmet demand, but the facilities that are being built cost more,” Stephens said. “While there is more being spent on supply now, we feel like it’s a nicer product so there’s not quite as much supply coming online as everybody fears.”

High, who has been working on numerous self-storage projects with Madison Capital Group, said it’s a good long-term investment in real estate because “it has a pretty stable customer base, stable rent roll.”

Redeveloping vacant big-box retailers or warehouses has been useful in working to meet the self-storage demand.

“We’re in the process of finishing up an old Lowe’s Home Improvement store in Raleigh and just finished a Building Supply in Fayetteville. We do a fair amount of conversions,” High said. “We’ve got designs for [converting] two Kmarts, one in Jacksonville and one in Rock Hill, South Carolina.”