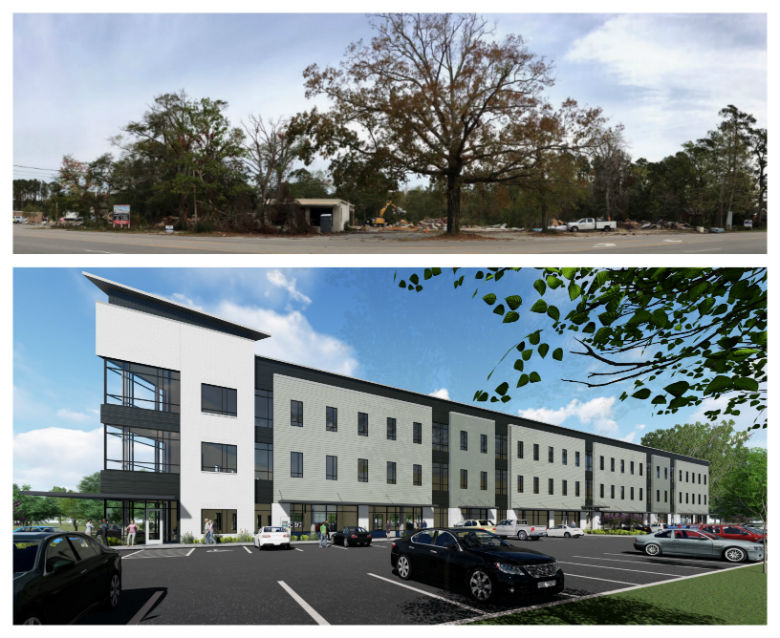 At top, the Oleander Drive site where Bradley Creek Station (rendering) will be built is shown Monday, after crews demolished nearly six buildings. (Photo courtesy of Steve Hall; rendering courtesy of SAMM Properties)
The demolition of several buildings in the 5800 block of Oleander Drive in Wilmington signals the pending arrival of new retail and office space to the busy corridor.

Nearly all of the six structures, mainly commercial, have come down to make way for Bradley Creek Station, a 76,000-square-foot office and retail complex for which construction is expected to start early next year.

About a third of the new complex's space, mainly in the first-floor retail portion of the three-story structure, has been reserved by users whose names have not yet been announced, said developer Steve Anderson and Steve Hall, partner in Wilmington-based commercial real estate firm Maus, Warwick, Matthews & Co.

But Anderson and Hall did reveal the categories of some users that have already indicated they want Bradley Creek Station space: a bank, coffee shop, full-service spa, gift store, mortgage company and dental office.

"We've already got a tremendous amount of activity on it ... We'll start seeing people come out of the woodwork now with the demolition going on and seeing that site work happening," Hall said Monday. "And that's the exciting part because you don't know exactly who's looking or ready to make the transition."

Crews subcontracted by McKinley Building Corp. have been working since last week on the demolition under a demolition permit, with full construction permitting expected by mid- to late-January, Anderson said. The building was designed by architect Mark Loudermilk of Becker Morgan Group.

"The entire first floor is class-A retail, and then the second and third floors are class-A office," Anderson said, with the space up for sale or lease.

Filling three other new office buildings quickly in recent years -- The Offices at Airlie and The Offices at Mayfaire V and VI -- was an indicator of the demand in the area, Anderson said.

"We really felt like that was going to be two to three years worth of inventory that we would have had," he said of The Offices at Mayfaire V and VI.

Typically, with a 30,000- to 40,000-square-foot office building like those in the Mayfaire office park, Anderson and his development company SAMM Properties Inc. would have filled them with four to eight users, Anderson said.

"For us to have two users [Wilmington Health and nCino] in the same month come and take our entire inventory -- that's what pushed Bradley Creek Station up to really happen, realizing we were out of inventory," he said.

Anderson said that once construction starts, it will take about a year for Bradley Creek Station to be complete.