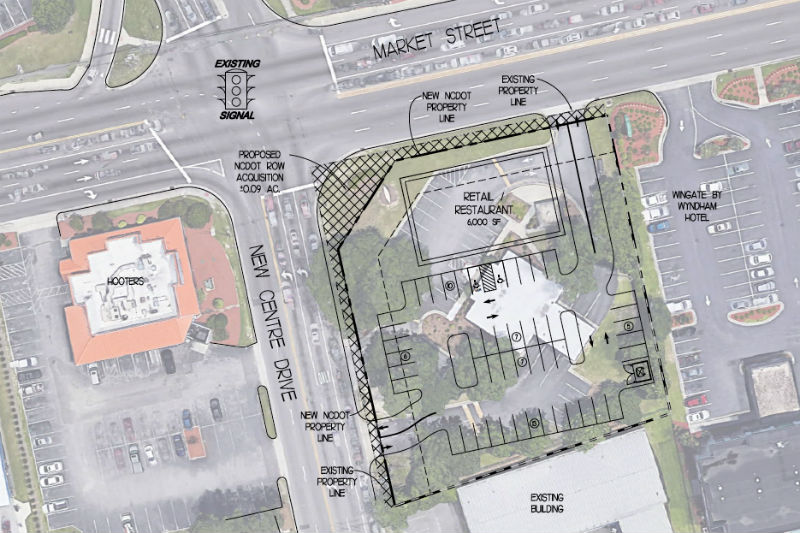 MPV Properties purchased the nearly 1-acre property at 5120 Market St., previously home to a PNC Bank branch, for $870,000 from PNC in a deal that closed recently in Charlotte.

Austin Easter, a broker with MPV Properties who moved to Charlotte after graduating from the University of North Carolina Wilmington with a degree in finance, said the PNC Bank building currently on the site will be demolished.

The property is zoned regional business (RB) and permitted uses include restaurants, fast food, small retail, medical offices and convenience food stores, according to a marketing flyer on the development, which has been tentatively titled "Shops on Market Street," though that name could change, Easter said.

"We believe it's one of the best retail corners in the city. Going to school there, I saw that that was obviously always a very busy part of town," said Easter, who also played on UNCW's baseball team. "We believe that the shop building has a really good chance for some tenants to be successful in that part of town where retail is so strong."

Nearby retailers include Target, Walmart, Chick-fil-A, Jason's Deli and Lowe's, the marketing materials point out. The site is across from Hooters.

The developers don't plan to duplicate what's already available in the area.

"There are a lot of retailers that are active that aren't in the Wilmington market yet, so we're looking to bring someone that's not already there and hopefully help them be successful in that market," Easter said.

He said MPV would like to complete the building, which would be the first project by MPV in the Port City, by the second quarter of next year, weather permitting.

Eckel said Friday that Julia Lackey, CFC's director of marketing for brokerage, also provided major assistance in the transaction, which closed in the wake of Hurricane Florence.

"Julia stepped up and played a major role in helping getting this deal closed in a very hectic time," Eckel said.