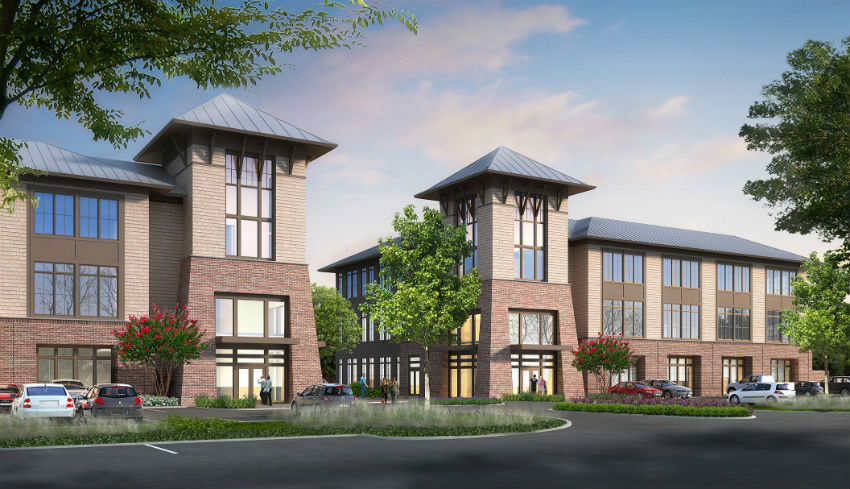 A rendering shows The Courtyard at Midtown Village, planned for property at 3701 Shipyard Blvd. in Wilmington. (Rendering courtesy of Graham Land Management)
Developers and commercial real estate brokers are beginning to market part of a mixed-use development in the works for property at the intersection of Independence and Shipyard boulevards, according to an announcement Friday.

The Graham Land Management plans described in a news release Friday afternoon include two 30,000-square-foot class A office buildings that will be known as The Courtyard at Midtown Village.

"Leasing opportunities are now available for The Courtyard buildings, which will be three stories and stand prominently along Shipyard Boulevard," the release stated. "The buildings were designed by LS3P with an emphasis on creating the architectural aesthetics which will be used throughout the entire project."

The Courtyard, at 3701 Shipyard Boulevard, is part of a larger project known as Midtown Village that will feature a mix of office and retail space, the release stated.

"Graham Land Management is working with Tom Harrington and Dan Weeks of H + W Design for the master planning of Midtown Village. A focal point and amenity of the project will be a large pond and fountain that fronts Shipyard Boulevard. Buildings will be joined by paved and tiled courtyards framed by plush landscaping, hardwoods and ornamental trees for seasonal color," according to the release. "The owners anticipate that several restaurants will be located in the development, and patrons will be able to take advantage of these outdoor spaces for al fresco dining. Currently a feasibility study has been completed for a potential hotel and the owners are in discussions with a local high-end restaurant as well as a national drug store, both of which have expressed interest in the site."

The Courtyard and Midtown Village will be marketed by Cody Cress and Tyler Pegg of The Cress Group of Coldwell Banker Commercial Sun Coast Partners.

“Midtown Village is ideally located at one of the most popular commercial corridors in New Hanover County,” said Cody Cress, vice president with Coldwell Banker Commercial Sun Coast Partners, in the release. “The property is located in the heart of midtown and the tenants will be well supported by the wide array of adjacent businesses and residential neighborhoods that surround the property on all sides. We anticipate a great deal of interest in the property from both local and national retailers.”