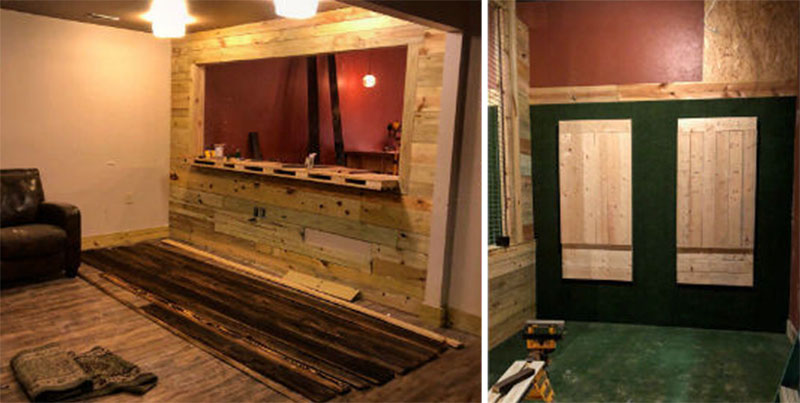 Wilmington resident Mia Troy plans to open Axes & Allies after leasing the 2,220-square-foot building at 1122 S. Third St., which used to be Red Barn Studio Theatre, from the firm that bought it from Lavin and Bakunas last year.

Troy said the area, with its Urban Mixed Use (UMX) zoning and proximity to the up-and-coming South Front neighborhood was "just a really good fit for my business model."

She said she was visiting her sister and brother-in-law in Denver in March when she visited Bad Axe Throwing and discovered the sport, where participants throw axes at targets, often while also enjoying beer or wine.

"We called and they said there was a three-week waiting list to get in. I said, 'What is going on? What is this?' And so I started doing some research and I said, 'I have to get in on this. I mean, this is so cool.' This is blowing up everywhere and it just seemed like a perfect fit for Wilmington," Troy said.

She hopes to open Axes & Allies in Wilmington by mid-July, pending some permitting because the venue will serve beer and wine, but no liquor. Troy described it as somewhat like a bowling alley; the business will have four indoor lanes with eight targets, and the goal is to hit the bull's-eye with your ax or get as close to it as possible. Groups of up to eight people per lane can try their hand at what those who have played it describe as satisfying entertainment.

Troy said she also hopes Axes & Allies can become a member of the World Axe Throwing League, which would allow Wilmington to become a stop on the league's tour and allow patrons to start league teams and potentially achieve rankings.

The former Red Barn Studio Theatre has been vacant for a while. Lavin and Bakunas, former Wilmington residents who had owned the property since January 2006 and had refurbished it to create the theater, sold it in July last year to Riverview Properties LLC for $215,000, according to New Hanover County property tax records.

"I showed that building so many times and I had so many people look at it and the thing was, for it to be in that location downtown just like on the outskirts, it was hard for anyone to have a vision of looking past the former use, which was the theater," Stephenson said.

That's why, Stephenson said, she was happy Troy came along with a unique concept that could make use of the property.

"She's ready to rock and roll," Stephenson said. "I'm really pumped for her."