On Military Cutoff, A Major Week For Major Mixed Use Projects 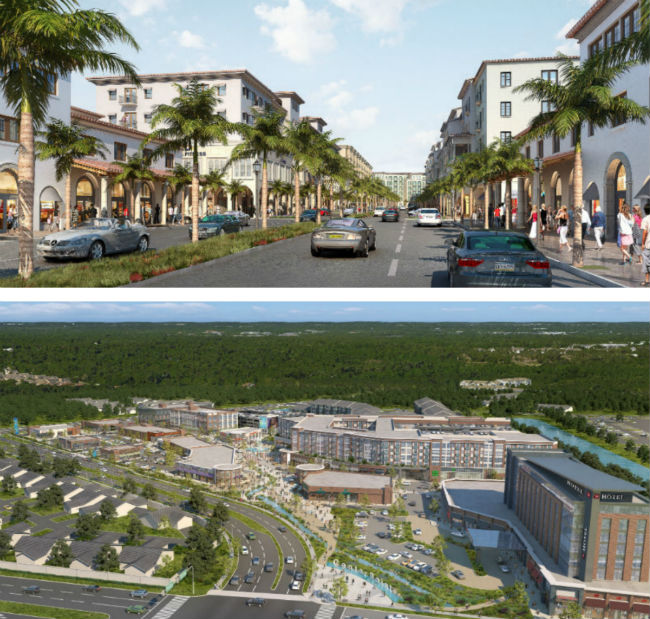 At top, a rendering of the planned mixed-use development The Avenue. Below, a rendering of Center Point.
The first full week of June is speedily becoming an important milestone for a couple of major mixed-use projects planned on Military Cutoff Road in Wilmington.

Concerns about traffic congestion along the bustling corridor have been at the forefront of discussions developers have had in recent months with local officials and residents in the area. Those discussions will likely continue during public hearings scheduled Tuesday and Wednesday on two separate projects.

Developers say improvements coming to the thoroughfare, some by the N.C. Department of Transportation and some paid for by developers themselves, should help to alleviate those concerns.

Requests that will allow The Avenue, a $200 million Westin hotel-anchored mixed-use project along Military Cutoff Road, to proceed will be considered by the Wilmington City Council at its Tuesday night meeting. On Wednesday, Center Point, a 1 million-square-foot, $250 million mixed-use development on Military Cutoff and Eastwood roads, is on the agenda for the Wilmington Planning Commission meeting.

He said the Comprehensive Plan adopted by city officials in 2016 has been a major factor leading up to this week for his project and others.

"The fact is that the real estate has gotten so valuable here in Wilmington, the only way you can justify the development is to do just as the city fathers wanted us to do -- put living quarters, work quarters and the play quarters all within the confines of the same development. It eliminates a lot of the traffic flow on our highways, gives them [people who live or work there] all the opportunities they're looking for in life. We find that to be the millennial crowd that is extremely interested in being close to it and the seniors want to be just as close," Swain said Tuesday. "This Urban Mixed Use zoning that they have right now really motivates the developers to move forward in this fashion, and it seems like the developers that are out there are very cognizant of that fact and they're embracing the fact."

Swain & Associates has had eight meetings with residents in the area to address concerns about Center Point. The Avenue developer, Greensboro-based The Carroll Companies, has also conducted numerous community meetings leading up to Tuesday night's meeting. The firm's requests for its 44-acre site were approved by the city planning panel in May and will be considered by the city council at its meeting at 6:30 p.m.

John Davenport, president of engineering, design and consulting firm Davenport, said that one of the main issues that has been coming up in recent meetings for The Avenue is working to explain how the more than $2.5 million in improvements The Carroll Companies plans to make will either help the traffic situation on Military Cutoff Road or result in no change.

Part of the problem is that when people hear that Military Cutoff has an "F" level of service, it doesn't take into account the whole picture, Davenport said.

"In the traffic engineering world, most engineers when they're designing a roadway for 20 years, they design for a 'D,'" Davenport explained.

That's because "if you design it for an 'A,' that means you shouldn't have any congestion any time whatsoever, which means that I-40 between Wilmington and Raleigh would be eight lanes instead of four."

But in that imagined Interstate 40 scenario, that area doesn't require eight to 10 lanes to accommodate the traffic, so that design would result in a wasted investment, Davenport said.

The improvements planned because of The Avenue take into account an originial site plan that has changed in scope of property uses. While a Westin hotel and conference center, along with a spa, apartments, office space and high-end retailers, are part of the plan, a grocery store and drive-through restaurants, commercial uses that would have generated more traffic, are not, explained Livian Jones, a consultant for The Carroll Companies.

Swain said he believes Center Point has a good shot at approval during the 6 p.m. Wednesday meeting.

Swain & Associates will be moving its offices to Center Point, where construction is not expected to start until the extension of Drysdale Drive is complete, possibly by 2020.

Construction on The Avenue isn't expected to start for at least 14 months, Jones said, if the project's requests are approved Tuesday night.