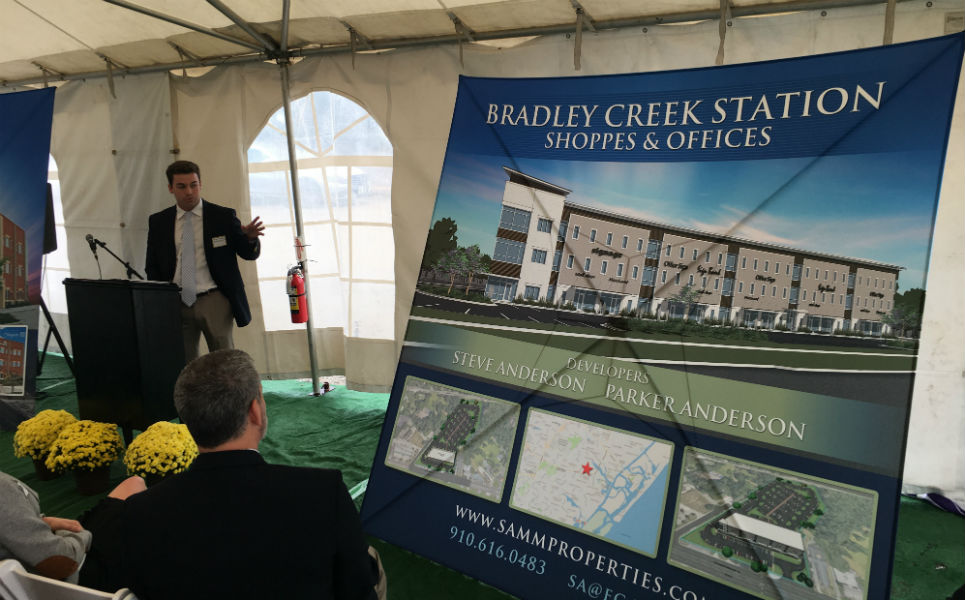 Developer Parker Anderson describes Bradley Creek Station, an Oleander Drive project, at the groundbreaking ceremony for the final two buildings in The Offices at Mayfaire series. (Photo by Cece Nunn)
The developers of the Mayfaire office park are in the midst of a new project: a 76,000-square-foot retail and office building that will replace aging structures on Oleander Drive.

At an event to celebrate the start of construction on the fifth and sixth buildings in the Offices at Mayfaire series located behind Mayfaire Community Center, Parker Anderson described a new project for the company he and his father, Steve Anderson, help operate called SAMM Properties Inc.

"Over the last few weeks, people have been asking, 'Now that [the office park at] Mayfaire's through, where is your development team heading next? We're excited to share with you that we will be heading to Bradley Creek Station over here on Oleander Drive, right down past the Dairy Queen. It is going to be a projected 76,000-square-foot buiding," Parker Anderson said to a crowd of about 100 business and community leaders gathered in a tent near the sites of the final two Offices at Mayfaire structures.

SAMM Properties unveiled a rendering of the potential design of Bradley Creek Station, by architect Mark Loudermilk of Becker Morgan Group, at the Mayfaire V and VI groundbreaking event Thursday.

"There's still a lot of eyeballs that have to see this and bless it moving forward, but the plan is to have 25,000 square feet of retail on the first floor and 51,000 square feet of class-A office space on the second and third floor," said Parker Anderson, adding that the site where some older commercial buildings will be demolished to make way for Bradley Creek Station is just under 6 acres.

Although the rain dampened plans for the ceremonial turning of dirt at Thursday, Steve Anderson and others said the soggy economic climate of years past seem to be long in the past for the Wilmington-area office market. And, in fact, the first Offices at Mayfaire building filled up in 2011 despite the shadows of the Great Recession, they said.

Not only could the office park not have continued to take shape without the current tenants of the Offices at Mayfaire I through IV, it also took partners to make The Offices a reality, Steve Anderson said.

"And there are two partners that I have here in this park ... Wayne Long believed in me in 2011 and needed some office space in that building," Steve Anderson explained, adding that his usual business partner Mark Maynard stepped aside to allow him and Long to work together on the first office building before resuming the Maynard-Anderson partnership for the next five buildings.

"I learned a lot from Wayne during those days," Steve Anderson said. Long was the CEO of Well Care Home Health and Farmin' Brands before he died in September this year.

Without Long and Maynard, Steve Anderson said, the office park "wouldn't have happened."

The development team was able to fill up The Offices at Mayfaire I "in the darkest days. We were then able, during the iffy times, to go over and start Mayfaire II, and that kicked us off to be able to do III and IV, all in about a 10-month timeframe," Steve Anderson said.

To tenants of the first four buildings that attended Thursday, he said, "What you did is you propelled the need and the market and the market accptance to be able to generate V and VI ... It's what the tenants and owners of I through IV did that enabled us to sign, within a six-week period this fall, 87,400 square feet to two tenants."

Those tenants are Wilmington Health, which leased the entire building that will be The Offices at Mayfaire V, and banking software firm nCino, which leased all of the sixth building.

Bradley Creek Station, though in a different location, is expected to build on past office successes. Steve Anderson said construction is expected to begin in about a year as the team, which includes McKinley Building Corp., finishes the final phase of the Mayfaire office park.