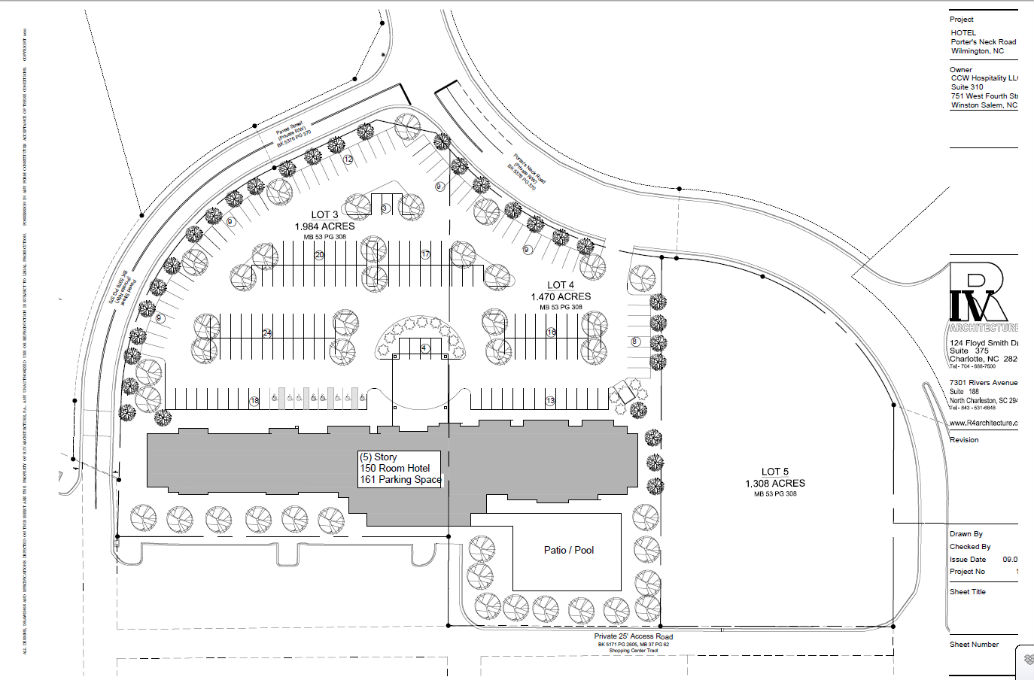 Wilmington-based Clarendon Properties is proposing to build a hotel on two commercial lots at 168 and 178 Porters Neck Road. (Courtesy of New Hanover County)
Developers want to build a 150-room hotel on Porters Neck Road, according to a proposal that will be the subject of a community meeting Nov. 1.

Wilmington-based Clarendon Properties is proposing to build the hotel on two commercial lots at 168 and 178 Porters Neck Road. The project would require a conditional zoning district approval from New Hanover County, stated a letter Thursday to adjacent property owners from Cindee Wolf of Design Solutions.

The site plan shows a five-story hotel with a patio and pool and 161 parking spaces on more than 3 acres of undeveloped land across from Lowe's Home Improvement, 191 Porters Neck Road.

New Hanover County requires that developers hold meetings for such requests for all property owners within 500 feet of the development tract boundary and any and all other interested parties, Wolf explained in the letter.

The meeting is scheduled to be held at 6 p.m. Nov. 1 at the offices of Clarendon Properties, 107 Stokley Drive, Unit 101, in Wilmington.

Clarendon Properties officials are not sharing the brand name of the Porters Neck hotel yet because the proposal is still in the midst of the zoning process.

Porters Neck and surrounding areas make up one of the fastest-growing parts of the county. In May, the Wells Fargo Championship brought tens of thousands of golf fans to the Eagle Point Golf Club in Porters Neck.

"In addition to golf groups, we believe that a hotel in northern New Hanover County will be appealing to other types of sports groups because they like to be close to restaurants and sports facilities such as some of the parks and other sports facilities that are in northern New Hanover County," said Connie Nelson, spokeswoman for the Wilmington and Beaches Convention and Visitors Bureau.

Clarendon Properties specializes in hotels, dental and medical offices and apartment communities, according to a recent news release on a Winston-Salem project the company is involved in. The Wilmington firm and Commercial Realty Advisors LLC of Winston-Salem are breaking ground in November on a five-story, 126-room Courtyard by Marriott at 640 West Fourth St. in Winston-Salem, the release stated.

The $18 million dollar hotel "is architecturally designed to complement adjacent properties and the surrounding neighborhood, and will offer numerous amenities," including a rooftop terrace, full-service restaurant and bar, swimming pool, fitness center and more, according to the release.