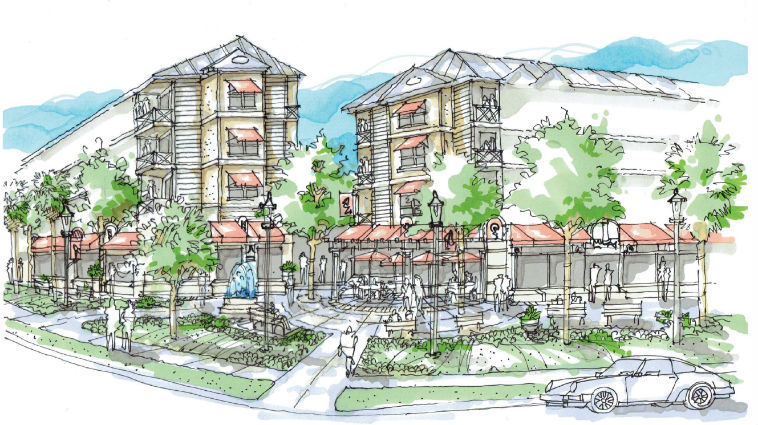 Harrington Square, the retail component of Harrington Village in Leland, is expected to be complete by spring of 2018. (Sketch courtesy of Coldwell Banker Commercial SunCoast)

The first two tenants of the commercial portion of a major mixed-use project in Leland are a homebuilder and nail salon and spa, according to an announcement Tuesday.

The tenants announced Tuesday include Sole Nails and Spa and McKee Homes.

Logan, the listing agent for Harrington Square who represented the developer in both leases, said Harrington Village is one of the largest commercial projects to be built in Leland in two decades. The complex will include 13 residential buildings – three four-story buildings with retail and office on the first floor and apartments above with elevator access, and 10 three-story apartment buildings. Pre-leasing for the apartments will begin in October 2017 and monthly rental rates will range from $799 to $1,399, according to the release.

Harrington Square involves the ground floor of the three four-story buildings in Harrington Village, offering about 30,000 square feet of retail and office space at the corner of Baldwin Drive and Village Road. Currently under construction, Harrington Square is expected to be complete in spring of 2018.

“Harrington Square will provide an upscale, walkable urban center that connects to the rest of the Leland community,” Logan said in the release.

She said the development could become a catalyst for the redevelopment of the Village Road corridor, and the commercial portion is expected to draw shoppers and diners from across the region.

“Harrington Square is generating a great deal of interest and we are talking to a wide variety of potential tenants, including a brewery, boutique restaurant, furniture store, shoe store and service companies such as tax preparers, private fitness and small medical offices,” Logan said in the release.

McKee Homes, a growing homebuilder in North Carolina with offices in Fayetteville, Raleigh and Wilmington, has leased 2,125 square feet for a new design center, a first for the firm in the Wilmington area, the release said.

“We are building a lot of new homes in the Leland area, and we expect to expand our activity even more in Brunswick County,” said Pat McKee, president of McKee Homes, in the release. “Harrington Square is an ideal location for our new Design Center, as it is easy to access and convenient to downtown Wilmington. This new space will allow clients to meet with our designers in a warm and welcoming environment, and will put them at ease as they select all of the elements and finishes needed to create their dream home.”

Sole Nails and Spa has leased 1,654 square feet and will provide a variety of spa treatments, including manicures, pedicures, waxing, massage and more, the release said.

The release said that according to Sharon Cushing, an agent with Coldwell Banker Commercial SunCoast who represented Nancy Pham, the owner of Sole, the Harrington Square space is the first of what she hopes will be many Sole Nails and Spa locations in the Wilmington area.