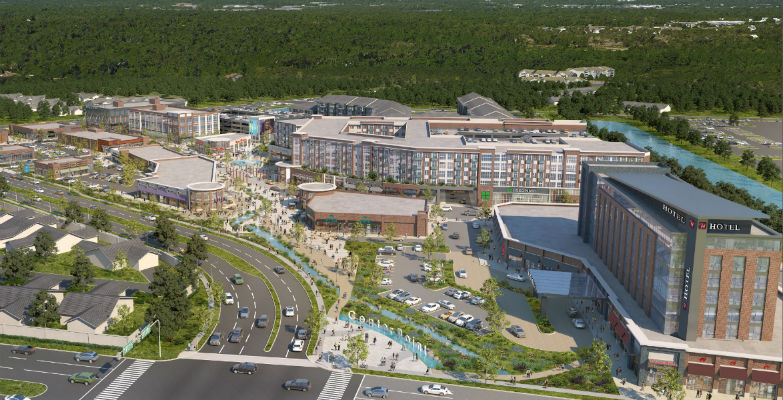 A rendering shows CenterPoint, a $250 million mixed-use project planned for Eastwood Road that would include 1 million square feet of retail, hospitality, office and residential space. (Courtesy of Swain & Associates)

A Wilmington-based development firm is planning a $250 million, 1-million-square-foot development on Eastwood Road.

An announcement Wednesday said Swain & Associates will develop the mixed-use project, CenterPoint, at 1531 and 1541 Eastwood Road. The retail, hospitality, office and residential center will be on 23 acres with street frontage on both Military Cutoff and Eastwood roads, adjacent to the Eastport neighborhood to the east and the Cambridge Village retirement community to the west.

"This tract of land is the best piece of undeveloped property in New Hanover County,” said David Swain, owner of Swain & Associates, in a news release. “We named it CenterPoint because we believe it will be a new center of activity in our region and will exemplify the type of mixed-use development that the city of Wilmington is working to attract to our community – ones that feature the right mix of compatible uses, are compact, pedestrian and bike friendly, accessible to transit, and well connected to adjacent neighborhoods and roadways.”

CenterPoint would include a five-star hotel, with seven stories and 200 beds, that has not yet been named.

"We cannot disclose who we are talking with, but we have had the major hotel users fly in to see us," Swain said.

Swain's company has developed more than 120 projects in 52 communities throughout South Carolina and North Carolina, including The Forum shopping center on Military Cutoff Road.

"We've been developing since 1976, and we've done an awful lot of projects, but this has the greatest magnitude in one location," Swain said.

Swain & Associates has the Eastwood Road property under contract to purchase it from the Wetherill family of Wilmington. The property has been in the family for decades, and two of five siblings live in homes on the property.

“We’ve had this property in our family for quite some time and have had numerous offers over the years,” said Richard Wetherill, a lifelong resident of Wrightsville Beach and Wilmington, in the release. “But we’ve been waiting for just the right project and just the right developer. When David shared his vision with us, it became an easy decision. CenterPoint is an innovative concept and we like the fact that Swain & Associates is a local firm with a great track record. David lives and works across the street from our property and he and his team will make sure that CenterPoint is something our family and the entire community will be proud of for years to come.”

According to a news release, one of the hallmarks of CenterPoint’s design is its proximity to the potential extension of Drysdale Drive, a new, four-lane road with median that is one of two designs being considered by the N.C. Department of Transportation to alleviate traffic congestion at the existing Military and Eastwood intersection. The release said the Drysdale Drive extension would connect Military Cutoff and Eastwood Roads and is an alternative to an elevated highway over the intersection, which according to DOT data, would cost considerably more and would take longer to construct.

“In analyzing options for the improvement of Military Cutoff Road, NCDOT recognized that a road through this property would be a smart solution to the traffic and congestion of the Military Cutoff/Eastwood Road intersection,” Swain said in the release. “And with the acquisition of the property, the extension of Drysdale Drive is that much more feasible. It’s considerably less expensive than building an elevated highway and significantly less obtrusive to the many businesses and homes that border the Military/Eastwood intersection. This is a win-win for our community and for CenterPoint.” 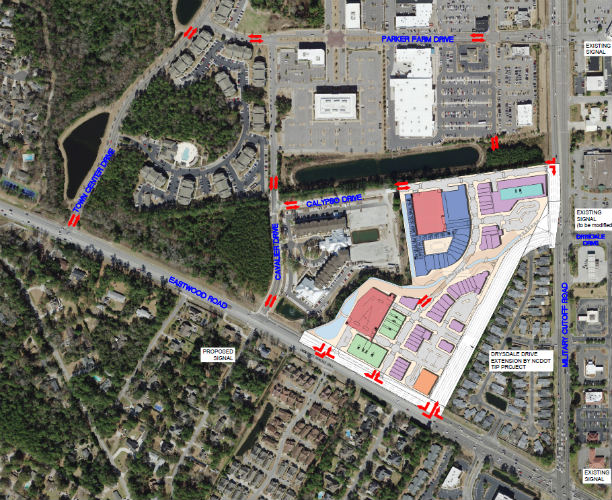 “Rezoning this property to UMX (CD) enables us to develop the land more efficiently than its current R-15 status allows,” said Swain in Wednesday's announcement. “It also enables us to create the type of mixed-use project called for in the City’s Comprehensive Plan. We look forward to working with the City on this rezoning request and to introducing our plans for CenterPoint to the community.”

Pending approvals, construction is anticipated to start on CenterPoint in 2019, concurrently with the DOT extension of Drysdale Drive, the release said.

Key features of CenterPoint will include the following:

Swain said the property could hold as many as 13 restaurants.

Other developers in the area welcomed the news of the CenterPoint proposal Wednesday.

"Sounds great to me," said Roy Carroll, CEO of Greensboro-based The Carroll Companies, who is planning a $200 million mixed-use project anchored by a Westin hotel and conference center in the 300 block of Military Cutoff Road. "This [CenterPoint] will help create synergy in the area to draw visitors and others to Wilmington."

Raiford Trask, one of the developers of Autumn Hall, said good retail, hospitality and office space in the area will benefit all of the neighboring developments.

Plans also call for the extension of the Gary Shell Cross City Trail for the full length of the frontage on Eastwood Road, and if approved, along the existing stream that bisects the property.

"With the extension of the Cross-City Trail, people from nearby neighborhoods, office buildings and Wrightsville Beach can easily access CenterPoint either on foot or by bicycle," the release said.

The release said that one of the most unique aspects of CenterPoint is a stream that meanders through the entire property.

“What started as a challenge ended up being one of the best features of the development,” said John Larsen, president of CI Design Inc., in the release. “The stream bisects the property and by placing bike paths and walking paths along it, it became the thread that connects all aspects of the property. We’re featuring entertainment spaces and outdoor dining on either side of the stream, making it a center of activity for the development. The plans call for a number of pedestrian bridges and one vehicular bridge, in addition to numerous fountains. The stream is truly unique and is my favorite part of the project.”