National Retailer Expected To Open This Year Off Market Street 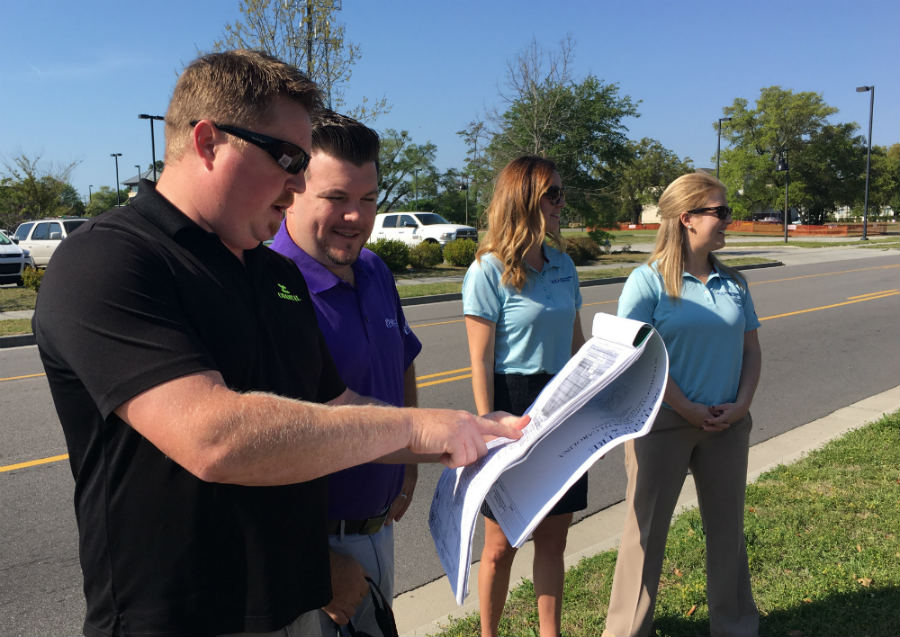 David Edmonds (from left) of Coastal Construction & Consulting and Eastern Carolinas Commercial Real Estate partner Nicholas Silivanch and brokers Tricia Macalka and Julie Stephenson discuss plans for a project on Gingerwood Drive. (Photo by Cece Nunn)
Site work has begun for a project off Market Street that will include a nearly 63,000-square-foot Academy Sports + Outdoors next to a 20,000-square-foot building for additional retail.

"The goal is to start in May on the [Academy Sports] building," said David Edmonds, executive director of business development for Coastal Construction & Consulting, the development firm for the project on Gingerwood Drive close to Costco.

Edmonds and brokers with Eastern Carolinas Commercial Real Estate, a Wilmington firm involved in the $11.5 million project, marked the official groundbreaking for the buildings, which are an addition to S&H Centre in the 5300 block of Market Street, on Friday morning.

"As it stands now, we're looking at the store opening at the end of the third quarter, beginning of the fourth quarter this year," Edmonds said.

The Academy Sports is expected to serve as a regional hub for the national retailer by drawing customers not only from Wilmington but also Pender and Brunswick counties, said Nicholas Silivanch, partner in ECCRE.

Academy Sports has signed a long-term lease for its portion of the new space, and Silivanch is working on filling the adjacent building.

While some older retailers in the area and across the U.S. are shuttering hundreds of stores, other concepts are ready to fill the void with omnichannel strategies, Silivanch said. The increasing number of residents and tourists in the Port City has also in some cases helped lure new retail brands.

"With Wilmington's population growth, it's made us more attractive to national retailers like Academy Sports," said ECCRE broker Tricia Macalka.

Typically, Academy Sports stores bring about 100 jobs. An Academy Sports + Outdoors location recently opened in Greensboro, and the Texas-based company also has at least six other stores in North Carolina among more than 225 throughout the U.S.