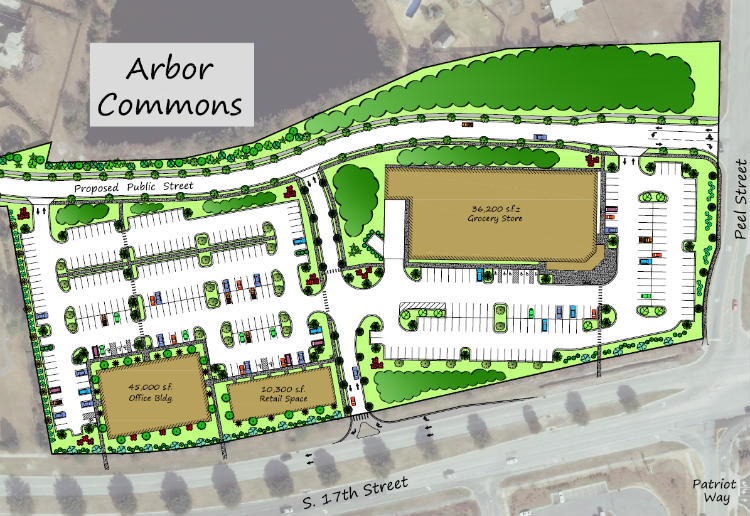 Site work is expected to begin in coming weeks on Arbor Commons, a mixed-use development off South 17th Street. (Site plan courtesy of Eastern Carolinas Commercial Real Estate)
A Texas-based investment firm that focuses on real estate has completed the purchase of 10 acres in Wilmington where a grocery store-anchored mixed-use project is planned.

Leon Capital Group, headquartered in Dallas with an office in Charlotte, paid $2.6 million for the land at 4301 S. 17th St. and John Barry Drive. The seller was GWT Properties LLC.

The grocery store anchor, which has not yet been offically named, is expected to occupy a new 36,200-square-foot building, while a 10,300-square-foot structure will include retail tenants. An office building of 45,000 square feet is also part of Leon Capital Group's development plan.

"The new development, called Arbor Commons, will begin site work in the coming weeks and plans to deliver spaces by the end of Q2-Q3 2017 to tenants at the property," said an announcement about the sale from Eastern Carolinas Commercial Real Estate, the Wilmington-based company that represented Leon Capital Group in the transaction.

ECCRE is handling the leasing for Arbor Commons. The development's location in the middle of Wilmington and New Hanover County "boasts some of the best population and income distribution" numbers in the county, according to the ECCRE release.

"Road frontage office and retail buildings will provide excellent visibility, and the access to the traffic light at John D. Barry [Drive] will provide tenants, shoppers and guests with easy access in and around the new development," the release said.

City officials approved a rezoning for the Arbor Commons site in June. Marketing materials for Arbor Commons point out some of the other new development evident or on the way to nearby property, including an Aldi grocery store planned for 3701 S. College Road; a Publix that opened during this summer at 716 Bragg Drive; and the movie theater-anchored Pointe at Barclay center under construction at South 17th Street and Independence Boulevard.