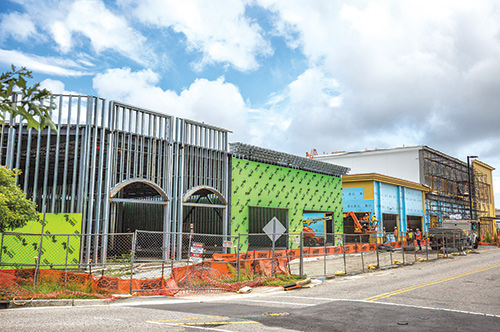 Construction is underway at Mayfaire Town Center for additional store spaces. The center is slated to add 90,000 square feet by next summer. (Photo by Chris Brehmer)

The forces of supply and demand, along with current and projected growth in the region, have led to the ongoing addition of new commercial space in the Wilmington area as brokers’ inventories are depleted.

The new space on the way includes 90,000 square feet in seven buildings, expected to be complete by summer 2017, at Mayfaire Town Center.

Although some portions of the town center are vacant, including two restaurant buildings, the owners of the center, CBL & Associates Properties, have been attracting tenants to the new spaces, including clothing retailer H&M and Palmetto Moon, a store that sells “Southern lifestyle” clothing, accessories and gifts.

Construction at Mayfaire and elsewhere in the region, including a new movie theater, restaurants and retail space in the works in midtown at The Pointe at Barclay, are signs of what brokers see as the typical cycle of low inventory spurring new space.

Silivanch, whose company is in charge of leasing for Bayshore Commons, added that the new center’s existing space is full, but the construction of a 5,000-square-foot outparcel building is part of the developers’ plans.

This year, among the properties ECCRE has handled have been older retail and industrial units that the company has filled with tenants and sold to investors.

Those investing in real estate, Silivanch explained, are chasing yield.

“People are chasing that 6.5 to 10 percent in real estate because the treasuries are at 3 percent or less,” he said.

Long Creek Holdings, a Florida limited liability company owned by multiple trusts, bought the second and third floors of the Howe Creek Landing office building at 700 Military Cutoff Road at the end of August for $4.4 million.

“Those were good income-producing properties that had good strong tenants,” Adams said of the recent sales.

Properties in the area’s most active markets, including the Landfall/Mayfaire submarket, midtown Wilmington and downtown, are particularly sought-after, said Cal Morgan, a real estate appraiser and owner of JC Morgan Co.

“Things are much better. We had a couple years [as a result of the Great Recession] where you couldn’t give it away,” he said.

“Commercial real estate in Wilmington is on the upswing, but has not grown as quickly as the residential market. This is OK because what investors, business owners and developers want is steady and consistent growth,” said Adam Nicholas, a broker with Keller Williams Commercial Realty, in a recent email.

“Commercial real estate is about calculated risk so having an area where growth is expected to steadily increase over the next 25+ years makes people more comfortable with their decision to buy or lease here. The perception of Wilmington’s commercial market overall is good, and the market in most areas is in a great place in terms of supply and demand,” he added.

“We like the Wilmington market. We think it’s growing and vibrant, and we’re looking forward to working within the market to bring some new tenants to the shopping center,” said Jeff Rosenberg, CEO of Big V Properties, the new owner of the center.

The Village at Myrtle Grove, a 74,370-square-foot center in the 5500 and 5600 blocks of Carolina Beach Road, includes local businesses in addition to national tenants.

The center was about 87 percent occupied at the time of the sale. Home Depot owns its portion of the property, a more than 100,000-square-foot building and about 10 acres, according to property tax records.

Along with interest from new investors in Wilmington-area properties, a new MLS is also helping local brokers.

Adams, who in addition to working at Coldwell Banker Commercial SunCoast serves as the president of Realtors Commercial Alliance of Southeastern North Carolina, led
recent successful efforts to bring a new commercial Multiple Listing Service to the group’s members.

Brokers had been trying to get a commercial MLS for the Wilmington area and surrounding counties for several years.

Previously, commercial brokers had to use a system that piggy-backed off the residential MLS.

These days, a company called Catylist is the vendor for the local commercial MLS, which Adams said has gotten good reviews among users in the region.

“It’s set up to provide the data that a commercial broker needs . . . plus we can see other listings throughout the Catylist network, and Catylist is growing,” Adams said.

As is the Cape Fear Region’s commercial offerings. Adams said he’s optimistic about the future, but he’s trying to figure out what the next catalyst might be for more growth.

“My heart tells me it’s economic development along the [U.S.] 421 corridor,” he said, referring to some of the last industrial land left in New Hanover County. “That corridor needs to boom. If that 421 corridor will boom, then we will have more demand for retail and office.”