Beach Building Can Come With Barriers 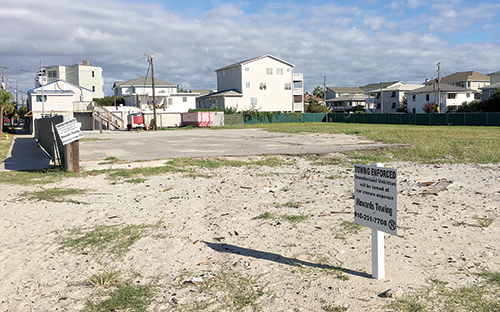 At Wrightsville Beach, vacant land near Johnnie Mercers Pier once held a store that burned to the ground in April. A developer has been hoping to build a mixed-use building on the lot that was once shared by the store. (Photo by Cece Nunn)

When it comes to development in the area’s beach towns, two words sum it up – it’s complicated.

There’s not a ton of places where new homes and businesses can go, though there are what Wilmington-Cape Fear Home Builders Association Executive Director Cameron Moore calls “pockets” in places like Carolina Beach, Kure Beach, Brunswick County beach towns and around Surf City and North Topsail Beach.

“One particular challenge with a confined amount of area is that many of the beach towns have to rely on a fixed property tax base, which can present challenges when it comes to services. This has caused some beach towns that had the option to look across to the mainland side and pursue voluntary annexations to help offset this,” Moore said. “From a regulatory barrier side of things, you have flood insurance, homeowners insurance, CAMA [Coastal Area Management Act] requirements, water and sewer constraints and other variables that play a part in how and when properties are developed.”

Each beach community is unique, said Tyler Newman, president and CEO of Business Alliance for a Sound Economy.

“The beach towns are an important part of the regional economy – tourism, room occupancy tax, sales tax income, parking revenue, property tax, in addition to the businesses that are based there and the folks that come and rent every year,” Newman said. “Increasingly, as we look at funding coastal storm damage reduction projects and inlets and bridges and ferries and other types of investments, everybody in the state has a vested interest in the continued viability of our beach towns.”

“It’s a multifaceted challenge to build or develop out on the barrier islands,” he said. “But at the same time, it’s where people want to be.”

Some of the projects that have been the subject of news reports – and controversy in some cases – this year have included potential development in Sunset Beach and Wrightsville Beach.

In August, the Southern Environmental Law Center filed a challenge to a state permit that would allow developers to build 21 beachfront homes in Sunset Beach, in a community referred to as Sunset Beach West, according to a law center
news release.

The center filed the challenge in the state Office of Administrative Hearings on behalf of the Sunset Beach Taxpayers Association and N.C. Coastal Federation.

“This state permit would allow the destruction of dunes that buffer the community from storms and hurricanes, and jeopardize the integrity of Bird Island [a bird sanctuary],” said Geoff Gisler, senior attorney with the Southern Environmental Law Center, in the news release. “Under this illegal permit, the community would lose the natural setting that makes Sunset Beach so unique for a questionable development in a hazardous location.”

Multiple efforts to reach one of the developers involved in the project, Sammy Varnam, were unsuccessful. But Varnam has said in recent news stories that those who oppose Sunset Beach West have a negative attitude in general toward coastal development. He said the developers are not doing anything illegal.

The Sunset Beach Town Council says some of the land belongs to the town, an assertion expected to be the subject of a pending court case.

“The town’s already made the statement that we feel we own the property, so the development really is not the question. It’s ownership,” Town Councilman Peter Larkin said.

Councilman Mark Benton said he is not against development, but in addition to the ownership issue, the property, next to the Bird Island sanctuary, is a unique case.

He said development there “would fundamentally change the look of Sunset Beach.”

Mike Giles, N.C. Coastal Federation’s coastal advocate, said in the Environmental Law Center’s news release that Sunset Beach West “threatens to undo the work done decades ago to protect Bird Island. We will ask the court to provide the protection that the State failed to.”

A de-annexation bill that would have removed the land for the Sunset Beach West development from town limits died earlier this summer during the General Assembly’s short session.

Newman, whose advocacy group BASE has partnerships with the Brunswick County Association of Realtors and Brunswick County Home Builders Association, said of Sunset Beach officials, “They’re continuing to make things more challenging for future investment. While at the same time, the beach town next door, Ocean Isle, they’ve got a really positive atmosphere for business and vacationers and folks who live there full time.”

Some regulations a developer has to consider are town-specific.

In Wrightsville Beach, for example, the height limit is 40 feet. At one time, a property owner had wanted to build a 50-foot mixed-use structure on land at the base of Johnnie Mercers Fishing Pier, but town officials have rejected proposals that might have allowed higher buildings or at least the consideration of higher buildings.

Town Manager Tim Owens said an approved plan for the project has been in place since around 2006, but Wrightsville Beach officials expect the owner to come back to the town with an amended site plan for the property at some point. In April, a store built in 1955 that shared the lot burned to the ground, and for now the land is vacant.

To address a problem relating to the potential need to rebuild existing homes, the town of Carolina Beach took action recently. The New Hanover County beach community became the first local entity to request the creation of a development line under a regulation approved by the Coastal Resources Commission in 2015, according to a news release from the Wilmington Regional Association of Realtors.

Other towns have also been considering it.

Referred to as the “legal non-conforming” issue, part of the concern relates to using a beach vegetation line set decades ago to determine where some structures can be rebuilt, though through the years nourishment projects have rebuilt beaches. The issue was affecting Carolina Beach real estate broker Julie Damron’s clients and their ability to procure loans.

“If your property is all of the sudden legal non-conforming, then your lenders are not apt to want to loan on it because that gives them a little bit of a scare there,” Damron said.

For WRAR, Carolina Beach’s action was a victory.

“This approach not only rewards communities that have a long-term commitment to beach renourishment,” said Adrienne Cox, WRAR public affairs director, in a news release, “but also returns some decision-making to local communities.”

On 463-acre site, resort-style rental community in the works in Navassa