By Cece Nunn, posted Aug 10, 2016
Tweet
The pieces could soon be falling into place for the town of Leland to eventually have a modern urban town center of its own.

Officials in the rapidly growing Brunswick County community will hold two public hearings on the same night later this month that affect the town’s future: one on potential incentives for a mixed-use project off Village Road and the other on an updated master plan that will help guide growth for the next several years.

The mixed-use project, under development by D. Logan of Logan Homes, includes a residential component, Harrington Village, with 300 apartments, and a commercial portion, Harrington Square (rendering courtesy of D. Logan shown below), encompassing 30,000 square feet of restaurant, retail or o 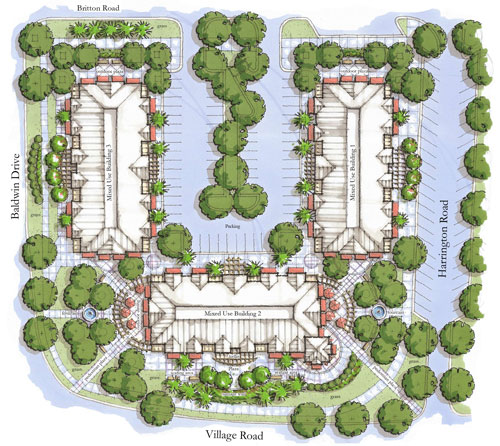 ffice space in three of 13 apartment buildings. The development would be built on 19 acres north of Village Road.

The town has had very little commercial development in more than two decades in that area, yet the need has continued as the town's population has grown, officials say. That's why the commercial portion of the Harrington project has been key to the consideration of incentives, said Gary Vidmar, Leland’s economic & community development director.

“We hope this project catalyzes the entire corridor and other developers see the same opportunity and capitalize on the infill properties that area available so this will become, hopefully, the first of many projects in the upcoming years to create that urban town center environment,” Vidmar said. “It’s going to take a number of projects over a period of time, but this is a key catalytic project to accomplish that. You’ve got to start somewhere, and he’s [D. Logan, the developer] making a huge commitment to do that.”

Logan shares the expectation that Harrington Square and Harrington Village could spark change.

“When you look at what’s happening across the United States, everybody wants walkable towns. The millennials in particular want places where they can live and walk to a coffee shop ... the urban lifestyle is coming back in a very strong way,” Logan said. “Downtown Leland will be updated. The same thing that’s happening in downtown Wilmington, we hope will begin to happen in downtown Leland.”

According to the town’s public notice on the public hearing, scheduled for 6 p.m. Aug. 25, the Harrington project’s incentives will include “waiving up to $120,000 of the project’s permitting fees and paying the developer the incremental increase in ad valorem taxes received by the Town from the improved parcels as a result of the developer’s investments and enhanced tax assessment of the property over a period of fifteen years.”

The incentives will be performance-based, with more of the details still being worked out between the town and the developer, Vidmar said. A final draft of the development agreement is expected to be presented to the town council during the Aug. 25 meeting before the public hearing, Vidmar said.

In addition to the public hearing on Harrington incentives, the final draft of Leland’s updated master plan will be considered by the town council at the same meeting, which takes place in the council chambers at the Leland Town Hall, 102 Town Hall Drive.