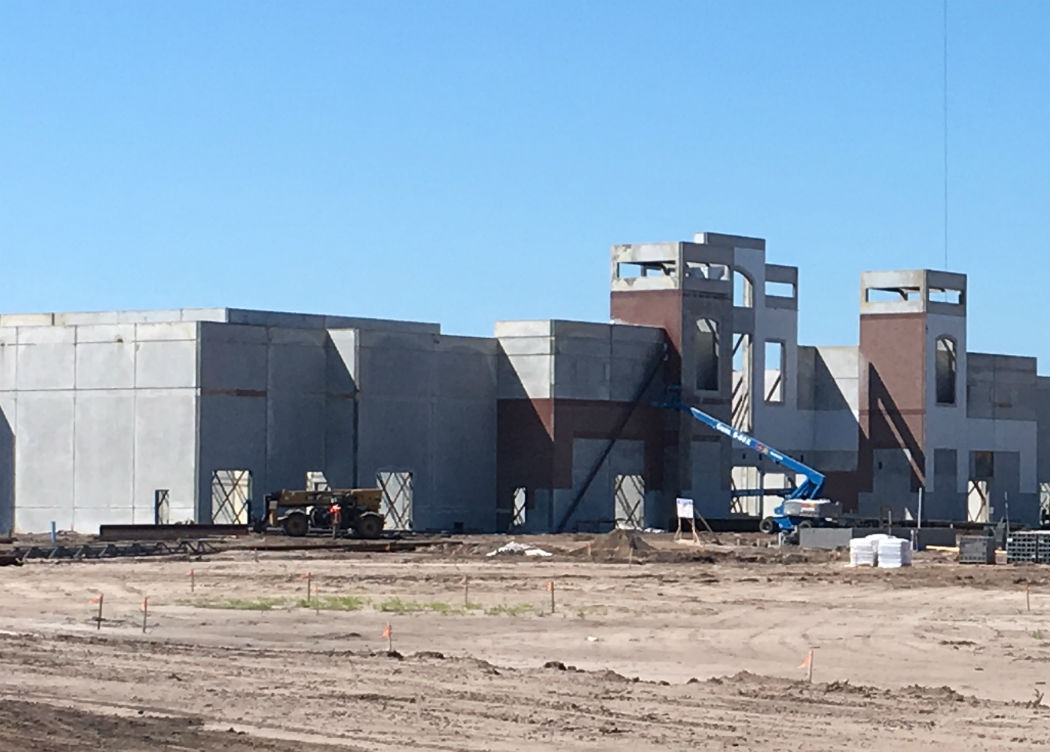 New tenants have signed leases for space at The Pointe at Barclay at South 17th Street and Independence Boulevard, where a 14-screen movie theater and restaurants are currently under construction. (Photo by Cece Nunn)
Marketing materials for a new movie theater-anchored shopping center in midtown Wilmington show a dozen more restaurants and businesses expected to occupy the development.

In addition to two restaurants that were previously announced, several businesses have signed leases for space at The Pointe at Barclay, under construction on land bordered by South 17th Street and Independence Boulevard, said Hill Rogers, broker in charge of Cameron Management, the local company that has partnered with Charlotte-based development firm Collett on the project.

According to Rogers and the marketing materials, posted on Collett's website, the following are the new Pointe tenants that have been revealed and previously announced:

Building 2, in front of a new 14-screen Stone Theatres movie theater:
Building 3, also in front of movie theater:
Building 9, just off Independence Boulevard:
Building 10, near the middle of the development, on the same side as Building 3:
The plans for The Pointe also include 10 more structures for additional retail and restaurant space, a potential 39,000-square-foot grocery store and a convenience store and gas station.

Those who work and live in and around the area say new businesses are overdue.

"Midtown hasn’t had any significant new commercial development in any one place in decades, and this represents just a terrific opportunity to address a lot of the community’s needs for shopping and dining and entertainment," said Hansen Matthews, partner in Wilmington-based commercial real estate firm Maus, Warwick, Matthews & Co.

Matthews, a broker, is not involved in the Barclay project, but his company's office is located in Barclay Commons at 2524 Independence Blvd., and he lives near the area.

"Midtown and the west side of the city in general, when you combine what’s happening immediately around that intersection and then move over to RiverLights [a master planned community on River Road] and consider that’s going to add over 2,000 rooftops, it’s a very, very providential time for this part of the city," he said.

In recent weeks, the walls have been going up on the Stone Theatres movie theater anchor, The Pointe 14, and two of the retail buildings. Construction on the additional buildings labeled with specific businesses in the marketing materials is expected to begin as soon as possible, Rogers said.

The Pointe is a commercial component of the 600-acre master planned Barclay development by Cameron Properties Land Co.